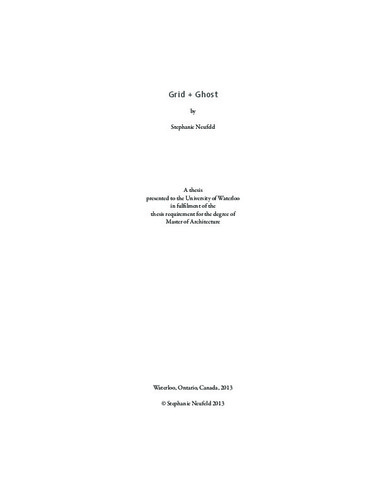 The thesis begins with a notion to design a school of architecture in Saskatchewan. The context, at first, appears overwhelmingly basic: an agricultural grid superimposed on a horizontal plain, under an endless sky. This formulaic description cannot capture what it is to experience the place. Stemming from this archetypal divide between earth and sky, the character of the prairies develops through a series of pairs. Each four-part section begins by setting up a polarity; on one side, a grid, and on the other, a ghost. The intersection of these two elements is illustrated through an interface and a segment of time. With each added layer, the polarities become increasingly entwined. The school of architecture is located, conceptually, in this space of reciprocity. The physical site is an industrial wasteland near the centre of Saskatoon, bounded on the east and west sides by two sets of train tracks. A timber and masonry warehouse, constructed for the John Deere Plow Company in 1910, is located along the end of the spur line to the east. The school of architecture finds itself within this building. The view down the tracks provides a glimpse of the prairie fields; the nondescript site itself alludes to this Deleuzian smooth space beyond the city limits. Even as it precisely situates and contains itself in this physical urban context, the school of architecture internalizes the dream of the prairie landscape. It is an educational institution and an incubator for the architectural imagination.