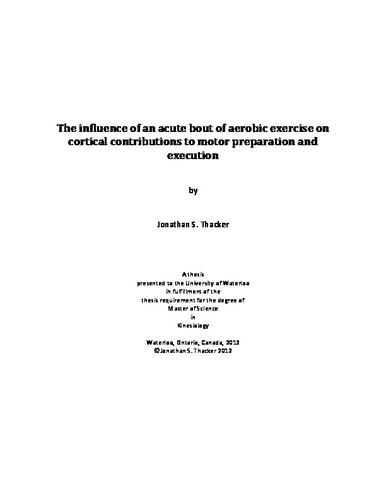 Increasing evidence supports the use of physical activity for modifying brain activity and overall neurological health (Hillman et al, 2008). Specifically, aerobic exercise appears to improve cognitive efficacy with regards to decisional oddball tasks shown through the P300, whose amplitude and latency is augmented (Magnié et al., 2000). Furthermore, the effects of an acute bout of aerobic exercise on cardiovascular function are well established and are sustained following exercise cessation. Based on these findings, we proposed that (1) an acute bout of exercise may modulate movement-related cortical excitability within motor areas and (2) that transient effects would be sustained as long as heart rate (HR) remained elevated. Subjects (n=23) were placed in a soundproof booth and instructed to perform a self-paced unimanual ballistic wrist extension every 3-6 seconds of the right wrist while holding a moveable handle. The motion involved a brisk contraction followed by relaxation and positional reset, collected continuously for approximately 8 minutes. Electroencephalography was used to measure movement-related cortical activity of the Bereitschaftspotential (BP) time-locked to onset of muscle activity associated with movement. The BP is a slow negative self-paced movement related cortical potential that precedes movement by approximately 1500ms. Current work commonly separates the BP into 3 main components early, late, and re-afferent Potentials. The early BP is representative of motor preparation of supplementary motor area (SMA) activity while the late component is representative of motor execution from primary motor cortex (M1). Early and late components are often distinguished by a a characteristic change in slope; where the early BP is a slow negative rise and the late components a steeper negative deflection beginning approximately 500ms prior to movement onset. Broken down further the late component consists of a portion of negative slope before giving rise to a peak approximately 100ms after movement onset known as the motor potential (MP). Following baseline measures, subjects performed 20 minutes of aerobic exercise at a moderate intensity (70% of age-predicted maximum heart rate) on a recumbent cycle ergometer. After the cessation of exercise, BP measures were recorded at two time points: immediately post-exercise (Post) and following a return to iv baseline HR (Post[Rest]) and two additional measures separated by 15 minutes each (Post[Rest2] and Post[Rest3]) which was, on average, 45 minutes after the cessation of exercise. Electromyography (EMG) was employed over the extensor carpi radialis muscle belly to describe muscle burst activity and onset characteristics. Results determined that Early but not Late BP was influenced by aerobic exercise. This early movement related cortical adaptation is indicative of enhanced processing within supplementary motor area. Moreover, this effect was sustained for up to an hour and 15 minutes following exercise cessation. This data is suggestive that aerobic exercise influences on motor related cortical excitability is not driven by an aerobic exercise effect and is more indicative of a delayed neurotransmitter effect.

Jonathan S. Thacker (2013). The influence of an acute bout of aerobic exercise on cortical contributions to motor preparation and execution. UWSpace. http://hdl.handle.net/10012/7336