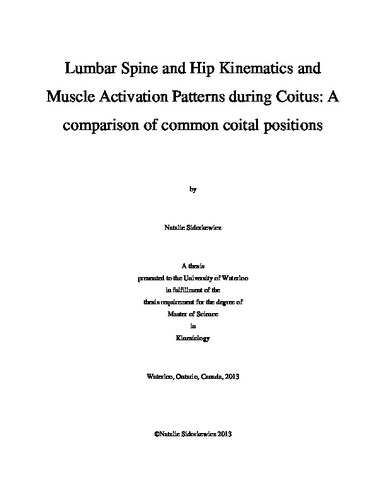 Qualitative studies investigating the sexual activity of people with low back pain found a substantial reduction in the frequency of coitus and have shown that pain during coitus due to mechanical factors (i.e., movements and postures) are the primary reason for this decreased frequency. However, a biomechanical analysis of coitus has never been done. The main objective of this study was to describe male and female lumbar spine and hip motion and muscle activation patterns during coitus and compare these motions and muscle activity across five common coital positions. Specifically, lumbar spine and hip motion in the sagittal plane and electromyography signal amplitudes of selected trunk, hip, and thigh muscles were described and compared. A secondary objective was to determine if simulated coitus could be used in place of real coitus for future coitus biomechanics research. Ten healthy males (29.3 ± 6.9 years, 176.5 ± 8.6 centimeters, 84.9 ± 14.5 kilograms) and ten healthy females (29.8 ± 8.0 years, 164.9 ± 3.0 centimeters, 64.2 ± 7.2 kilograms) were included for analysis in this study. These couples had approximately 4.7 ± 3.9 years of sexual experience with each other. This study was a repeated-measures design, where the independent variables, coital position and condition, were varied five (i.e., QUADRUPED1, QUADRUPED2, MISSIONARY1, MISSIONARY2, and SIDELYING) and two (i.e., real and simulated) times, respectively. Recruited participants engaged in coitus in five pre-selected positions (presented in random order) for 20 seconds per position first in a simulated condition, and again in a real condition. Three-dimensional (3D) lumbar spine and hip kinematic data were continuously collected for the duration of each trial by optoelectronic and electromagnetic motion capture systems. Electromyography (EMG) signals were also continuously collected for the duration of each trial. The kinematic data and EMG signals were collected simultaneously for both participants. Five sexual positions were chosen for this study based on the findings of previous literature and a biomechanical rationale. QUADRUPED – rear-entry, female quadruped, male kneeling behind – had two variations; in QUADRUPED1 the female was supporting her upper body with her elbows and in QUADRUPED2 the female was supporting her upper body with her hands. MISSIONARY – front-entry, female supine, male prone on top – also had two variations; in MISSIONARY1 the female was not flexing her hips or knees and the male was supporting his upper body with his hands, but in MISSIONARY2, the female was flexing her hips and knees and the male was supporting his upper body with his elbows. SIDELYING – rear-entry, female side-lying on her left side, male side-lying behind – did not have any variations. To determine if each coital position had distinct spine and hip kinematic and muscle activation profiles, separate univariate general linear models (GLM) (factor: coital position = five levels, α=0.05) followed by Tukey’s honestly significant difference (HSD) post hoc analysis were used. To determine if simulated coitus was representative of real coitus across all spine and hip kinematic and muscle activation outcome variables, paired-sample t-tests (α=0.05) were performed on all outcome variables for the real condition and their respective simulated values. In general, the coital positions studied showed that, for both males and females, coitus is mainly a flexion-extension movement of the lumbar spine and hips. Males used a greater range of their spine and hip motion in comparison to females. As expected, differences were found between coital positions for males and females and simulated coitus was not representative of real coitus, in particular the spine and hip kinematic profiles. The results found in this biomechanical analysis of common coital positions may be useful in a clinical context. It is recommended that during the acute stage of a low back injury resulting in flexion-, extension-, or motion-intolerance that coitus be avoided. If the LBP is a more chronic issue, particular common coital positions should be avoided. For the flexion-intolerant male patient, avoid SIDELYING and MISSIONARY2 as they were shown to require the most flexion. Both variations of QUADRUPED are the more spine-sparing of coital positions followed by, MISSIONARY1. Coaching the male patient on proper hip-hinging technique while thrusting – an easy technique to incorporate in both variations of QUADRUPED – will likely decrease spine movement and increase the spine-sparing quality of QUADRUPED. For the flexion-intolerant female patient, avoid both variations of MISSIONARY, especially with hip and knee flexion, as they were shown to elicit the most spine flexion. QUADRUPED2 and SIDELYING are the more spine-sparing coital positions, followed by QUADRUPED1. Subtle posture changes for a coital position should not be considered lightly; seemingly subtle differences in posture can change the spine kinematic profile significantly, resulting in a coital position that was considered spine-sparing becoming a position that should be avoided. Thus, spine-sparing coitus appears to be possible for the flexion-, extension-, and motion-intolerant patient. Health care practitioners may recommend appropriate coital positions and coach coital movement patterns, such as speed control and hip-hinging. With respect to future research in the area of sex biomechanics, using simulated coitus in replace of real coitus is not justifiable according to the data of this study. However, including a simulated condition did prove beneficial for increasing the comfort level of the couples and allowing time to practice the experimental protocol. Future directions may address female-centric positions (e.g., ‘reverse missionary’ with male supine and female seated on top), and back-pained patients with and without an intervention (e.g., movement pattern coaching or aides, such as a lumbar support).