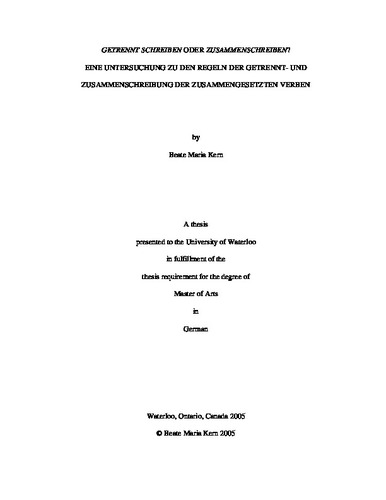 This thesis explores the usage of the new spelling rules in the complex area of separate and compound spelling. This area was a main topic in the reform of German orthography 1996/98. The old rules can be characterized as a complex and incoherent system. The primary ambition in defining new rules for separate and compound spelling was to simplify the writing process in order to facilitate an easier usage of written language for the German speaking community. <br ><br /> The basic concept of the new rules is the declaration of separate spelling as the default, making compound spelling the exception. As a consequence, most words of the German vocabulary, which were spelled as compounds before, are now to be spelled separately. The publication of the new rules for this orthographic area in the year 1996 caused a lot of criticism amongst linguists, the main point of criticism being that words, which grew together on the basis of grammatical processes, had been robbed of their status as words. They are now word-groups in which the two parts do not belong together and have their own individual status and meaning in the sentence. These rules are in opposition to the productive tendency of ?Univerbierung? in the German written language. This means a process whereby words, which stand next to each other in a written text, grow together under special conditions. <br ><br /> This thesis has two main aims: The first aim is to define the system of separate and compound spelling as a combination of grammatical and orthographic aspects. It will be shown how grammatical categories are influencing the orthography of these words. Additionally, it will be shown how the new rules produce spellings which are grammatically incorrect. The second is to verify the prognosis that the new rules were not accepted by the German language community. This thesis presents the results of a corpus analysis drawn from the text corpora of contemporary German language which is available on the website of the <em>Institut für deutsche Sprache</em>. Articles from six different newspapers were analyzed to see if and how the new rules for the groups verb and verb, adjective and verb and noun and verb were used in these texts. The results of this research have been compiled for the period of time from August 1999 to December 2000 (Corpus 1) and August 1999 to June 2003 (Corpus 2). It was uncovered that for more than half of the analyzed verbs the new rules were not used consistently. The divergence from the spelling norms ranged from 10 to 50 percent. In particular the group adjective and verb showed a high deviation from the new rules for compound and separate spelling. These results can be explained both with semantic and syntactic reasoning.