The Role of Glucocorticoid Receptor Signaling in Zebrafish Development 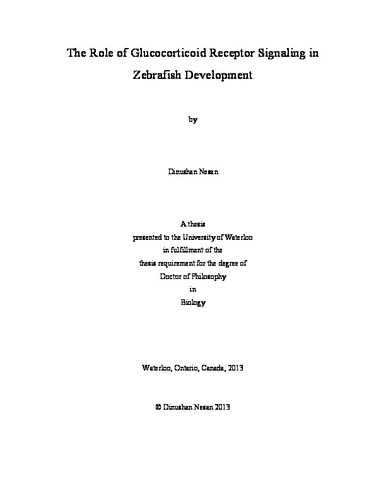 These studies present a series of novel roles for glucocorticoid signaling in the developing zebrafish embryo. The best-characterized roles of cortisol, the primary circulating corticosteroid in teleost fish, are known to occur by the activation of the glucocorticoid receptor (GR) in the post-hatch animal to mobilize energy reserves for response and recovery from stressful situations. For the first time, evidence is presented that GR and cortisol are key developmental regulators in the pre-hatch zebrafish embryo and that glucocorticoid signaling modulates multiple critical developmental pathways and affects embryogenesis in diverse ways. Prior to these experiments, very little was known regarding the developmental role of glucocorticoids in lower vertebrates. In mammalian models, there has been extensive study of the action of these steroids in late-stage organ maturation, and they have a variety of clinical and biomedical applications. However, in fish, there was a relative dearth of information regarding the basic dynamics and potential functional roles of cortisol and GR in embryogenesis. Zebrafish are a popular model for developmental study, with optically transparent embryos that allow for reliable observation. Additionally, the zebrafish genome is fully sequenced and extensively annotated, and a variety of molecular biology techniques are well-established in the existing literature. The zebrafish is also now recognized as an advantageous model for endocrine and stress axis studies, as it expresses a single GR gene, unique among teleosts but comparable to mammals. Preliminary studies published in the literature described cortisol and GR as deposited in the zebrafish embryo prior to fertilization, and showed their expression declining prior to hatch, then rising significantly as larvae approach the stage of first feeding. This dynamic expression of both ligand and receptor during embryogenesis, combined with knowledge from mammalian models, led to the hypothesis that glucocorticoid signaling may be functionally relevant in zebrafish development. A variety of techniques were used to examine the roles of cortisol and GR in the zebrafish embryo. Morpholino oligonucleotides were injected into one-cell embryos to block GR protein translation, allowing for the identification of GR-responsive developmental events and putative GR target genes. High-density microarray analysis of GR morphants presented numerous novel genes and pathways that are modulated by glucocorticoid signaling in the embryo. The ability to microinject molecules into a newly-fertilized zygote also allowed for other manipulations, including the addition of exogenous cortisol or the use of a cortisol-specific antibody to sequester maternally deposited cortisol. These studies provided the first evidence regarding the functional importance of the maternal cortisol deposition in the zebrafish oocyte prior to fertilization. The detailed temporal and spatial expression of GR mRNA and protein in the developing embryo has been characterized for the first time. GR expression is widespread, especially in developing mesoderm, and de novo GR transcription in the zebrafish embryo begins within 12 hours post fertilization. Lack of GR protein expression in the developing zebrafish embryo causes reduced growth, delayed somitogenesis, altered myogenesis, and severely reduces post-hatch survival. Additionally, GR modulates the expression of bone morphogenetic proteins, a family of morphogens that are involved in major developmental events including dorsoventral patterning, somitogenesis, myogenesis, and organogenesis. Reduction in GR protein content in the developing embryo is also linked to other major developmental processes including neurogenesis, eye formation, cellular adhesion, and development and function of the hypothalamic-pituitary-interrenal (HPI) axis. Cortisol in the early embryo, which is contributed entirely by maternal deposition prior to fertilization, is an important regulator of cardiogenesis and development of the HPI axis. Modulation of cortisol content in the early embryo causes an impairment of the post-hatch response to a physical stressor, as larvae exposed to increased cortisol during embryogenesis displayed an inability to increase heart rate in response to an acute physical stress, and did not display the classical increase in cortisol that follows a stressor challenge. Embryos that experience lowered glucocorticoid signaling in development tend to have a heightened post-hatch response to stress, further supporting the conclusion that HPI axis development is regulated by glucocorticoid signaling. These studies have identified key cardiogenic and HPI axis genes that are GR-responsive, providing mechanistic explanations for these phenotypic changes. Together these findings indicate that maternal deposition of cortisol in the embryo can pattern the post-hatch larva and has definitive impacts on performance as the offspring begin locomotion and approach feeding stages. In total, these studies demonstrate that glucocorticoid signaling is critically important to zebrafish embryogenesis, defining novel roles that are completely independent of the classical vertebrate stress response. These functions have significant effects on diverse developmental pathways and processes, and with the potential applicability of the zebrafish model to studies in higher vertebrates, may have important biomedical applications.