Mode of Action of Daptomycin, a Lipopeptide Antibiotic 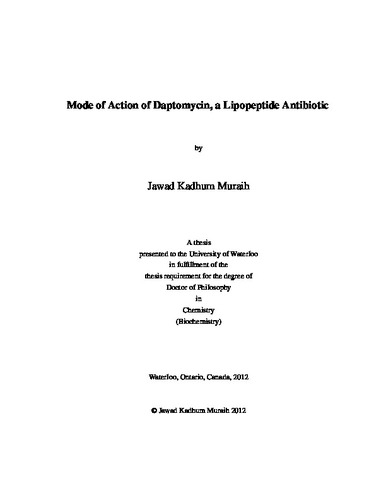 Daptomycin is a lipopeptide antibiotic that contains 13 amino acids and an N-terminally attached fatty acyl residue. The antibiotic kills Gram-positive bacteria by membrane depolarization. It has long been assumed that the mode of action of daptomycin involves the formation of oligomers on the bacterial cell membrane; however, at the outset of my studies, this had not been experimentally demonstrated. In the work described in this thesis, I have used fluorescence energy transfer (FRET) between native daptomycin and an NBD-labeled daptomycin derivative to demonstrate that the antibiotic indeed forms oligomers on bacterial cell membranes. In a liposome model, oligomer formation depends on calcium and on phosphatidylglycerol (PG). The oligomer forms rapidly and is stable for a length of time longer than required for the bactericidal effect. Through variation of the ratio of FRET donor (native daptomycin) and acceptor (NBD-daptomycin), I have determined that the oligomer consists of approximately 6–7 molecules, or, depending on the structure of the oligomer, possibly up to twice that number. Oligomer formation on liposomes and on bacterial membranes was confirmed using excimer fluorescence of a perylene-labeled daptomycin derivative. Excimer fluorescence was also used to demonstrate a stoichiometric interaction between daptomycin and PG. It has previously been shown that the bactericidal activity of daptomycin requires calcium and correlates with the concentration of PG in the bacterial cell membrane; these requirements mirror those observed here for oligomer formation. Furthermore, membrane permeabilization is selective, and electron microscopy of bacterial membranes exposed to daptomycin has revealed no discontinuities or accretions of electron density. Both of these findings suggest formation of a small membrane lesion, which is compatible with the small size of the oligomer that was determined here. In conjunction with these previous findings, the experiments contained in my thesis strongly suggest that the oligomer is the bactericidal form of daptomycin.