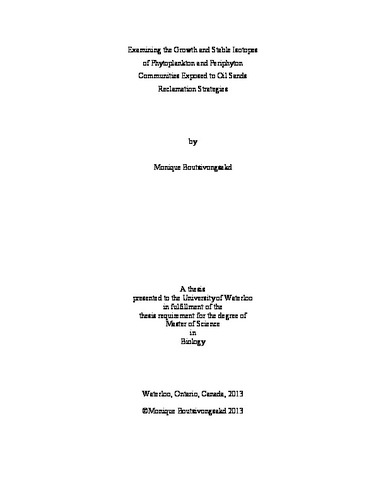 The impacts of oil sands processed materials (OSPM) on phytoplankton and periphyton community growth and stable carbon and nitrogen isotopes were examined. Estimates of plankton and periphyton community growth, measured as chl a and dry weight, were low and similar in reference and OSPM reclamation wetlands. The use of stable isotope analyses revealed higher δ15N of plankton and periphyton in OSPM wetlands than reference wetlands, possibly due to increased TN concentrations in some OSPM wetlands. In the laboratory, water-soluble fractions (WSF) of two types of OSPM (mature fine tailings, MFT and consolidated tailings, CT) and an amendment material (peat-mineral mixture), potential fill materials in wetland or end pit lake reclamation, were examined for phytoplankton community growth and stable carbon and nitrogen isotopes. All WSF treatments had higher chl a compared to reference water and maximum growth was observed at a 50:50 ratio of peat:CT or peat:MFT. In general, WSFs of peat had the highest concentration of total nitrogen (TN) whereas WSFs of MFT had the highest total phosphorus (TP; 3x higher). The results suggested that the addition of peat as an amendment to OSPM (particularly for MFT), contributing additional TN, could improve phytoplankton community growth in oil sands reclamation. At higher percentages of MFT WSF, there was increased turbidity due to fine clay particles that likely contributed to reduced phytoplankton growth. Turbidity could be an important factor limiting phytoplankton growth and thus reducing dietary resources and biological detritus (via sedimentation) in the initial development of an end pit lake. The WSFs also promoted the unfavourable growth of filamentous algae, highest at intermediate concentrations of peat and CT WSFs and inhibited in MFT WSFs due to light limitation. Stable N isotopes of plankton and filamentous algae suggests that 15N enrichment of algae could be a useful indicator of nutrient inputs, including OSPM seepage into natural aquatic systems, for oil sands regional monitoring programs.