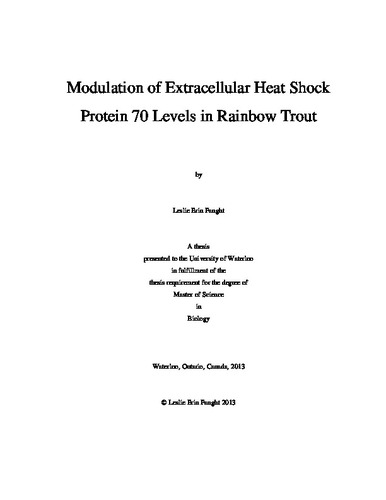 At the cellular level, the stress response involves the synthesis of a highly conserved family of heat shock proteins (Hsps). These proteins are essential for maintenance of cellular homeostasis, both in times of stress and in normal cell functioning. Some of the most abundant forms of Hsps in the cell are members of the 70 kDa family. Intracellular heat shock protein 70 (Hsp70) expression in response to proteotoxicity is a highly conserved cellular stress response, but little is known about the role of extracellular Hsp70 (eHsp70) in fish. In order to begin characterizing eHsp70 in fish, the hypothesis that an acute stressor will elevate plasma Hsp70 levels in rainbow trout (Oncorhynchus mykiss) was tested. Subsequent in vitro studies examined whether eHsp70 level was modulated by cortisol and if this involved the action of the glucocorticoid receptor (GR), a ligand-activated transcription factor. The effect of cortisol on the eHsp70 response is important to consider because this steroid is elevated as a result of stressor exposure to allow for short-term allocation of energy stores to cope with stress. Cortisol is the primary corticosteroid in fish and exerts its main effects by binding to either GR or mineralocorticoid receptors (MR). Furthermore, eHsp70 has been previously implicated as having important immunoregulatory roles in mammalian models, but nothing has yet been reported in fish. To this end, a hypothesis tested here was that eHsp70 levels will increase after exposure to the bacterial endotoxin lipopolysaccharide (LPS), and that this response is modulated by cortisol. Finally, research on the effects of exogenous Hsp70 has not been reported in lower vertebrates; however, the relevance of this protein in intercellular signaling, especially in regards to immune regulation, is gaining increasing importance in mammalian models. Therefore, an experiment to determine whether Hsp70 would elicit upregulation of key immunoregulatory cytokines was also conducted. To accurately measure the low levels of Hsp70 in the plasma, a competitive antibody-capture enzyme-linked immunosorbent assay (ELISA) was developed. In the in vivo study, fish exposed to an acute heat shock (1h at 10°C above ambient temperature) exhibited a significant elevation in red blood cell Hsp70 levels over a 24 h period. There was also a significant increase in plasma Hsp70 levels at 4 h, but not at 24 h post-heat shock. To more specifically determine how cortisol affected the release of Hsp70, in vitro studies using primary cultures of hepatocytes demonstrated that cortisol significantly decreased eHsp70 levels in the medium at 24 h when compared with untreated controls, and this response was abolished in the presence of a GR antagonist, mifepristone (RU486). This result for the first time established a link between cortisol signaling and eHsp70 release in any animal model. When hepatocytes were exposed to LPS in vitro, eHsp70 levels were significantly lower in the LPS (30 µg/ml) group; however, heat shock abolished this effect at 24 h. Though eHsp70 levels in the heat shocked hepatocytes treated with low-dose LPS (10 µg/ml) was similar to untreated control levels, high-dose LPS treated hepatocytes showed significant elevation of eHsp70 levels above the low dose group. The ability of LPS to modulate eHsp70 release was not observed to be further regulated by cortisol. While this work suggests the modulation of eHsp70 by LPS, the physiological role remains to be elucidated. Finally when hepatocytes were exposed to exogenous Hsp70, there was no effect on key immunoregulatory genes (IL-1β and IL-8) transcript levels; however, the effect of this protein remains to be tested using other cell systems, including immune cells in fish. Overall, eHsp70 concentration was measured in trout plasma using a competitive ELISA and demonstrates for the first time that stressor exposure affects plasma eHsp70 levels in fish. Furthermore, cortisol, the primary corticosteroid in teleosts, modulates eHsp70 release in trout hepatocytes and this is action is mediated by GR signaling. Also, while trout hepatocytes secrete eHsp70 in response to endotoxin shock, a role for eHsp70 in eliciting an immune response is not clear in lower vertebrates. Taken together the results from this study suggest a role for eHsp70 in acute stress adaptation in fish, but the target tissues involved and the physiological responses remain to be elucidated. Further work on the effects of eHsp70 on target tissues effects, and the mechanisms involved, may have important implications in our understanding of the role of this stress protein in cell signaling and stress adaptation in fish.