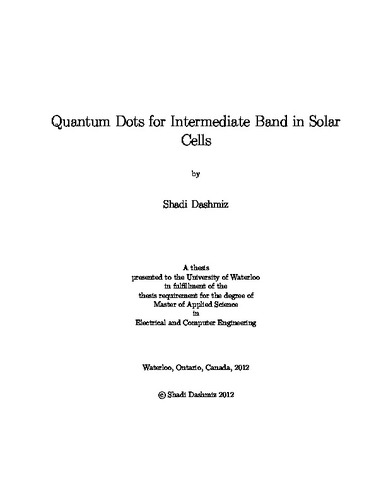 The commercially available solar cells suffer from low efficiency and high cost. This would avoid presence of solar cells as a secure energy resource in the market. Problems stem from two facts. Firstly, band gap of materials deployed for cell fabrication do not match the solar spectrum. Secondly, harvesting all the generated electrons is imperfect due to presence of many non-radiative recombination processes and, thermalization of electrons. To transcend these deficiencies, third generation of solar has been introduced. This new generation renders a whole new concept both in design and materials of solar cells scope. One of new introduction to solar cell field is Quantum Dot (QD). QD offers a broad range of tunability. The optical and electrical properties of QDs can be altered by choice of material, size and shape; therefore; they have great potential for high efficiency cell fabrication. QDs are mainly grown via MBE or synthesized via Colloidal solutions. QDs could be integrated as a part of one of new and promising third generation cells, named Intermediate Band Solar Cells. QDs could be employed as the intermediate level. If MBE is the selected method for cell fabrication, QDs would grow in a matrix of barrier material accompanied with a wetting layer. Wetting layer would disturb the ideal condition predicted in theory for gaining the high efficiency. To study how wetting layer would affect IB performance two sets of simulations have been carried out. One part is done with COSMOL. In this part different number of QDs layers have been simulated with and without wetting layer. The result showed that parasitic effect of wetting layer could not be eliminated large stacks of QD are stacked together, to achieve the promised efficient wetting layer should be eliminated from the system. In MATLAB part QDs have been approximated with simple cuboid. The main aim in this part was to compare how the result of taking into the account the real shape differs from a simple approach which has been the most reported the most in literature. If all the restrains on achieving high efficiency of IBSC are met, still one major draw- back remains and, that is high cost of MBE process. This would hinder mass production of IB cell. One possible potential method to gradually replace MBE can be Colloidal QDs. Colloidal QDs are fairly low cost and easy to fabricate. In this work, colloidal crystal growth was examined. The best condition for monolayer deposition was obtained and, the feasibility of crystal growth was demonstrated. additionally, There was an attempt to grow more than one layer and investigate result of embedding QDs in a barrier of another material.