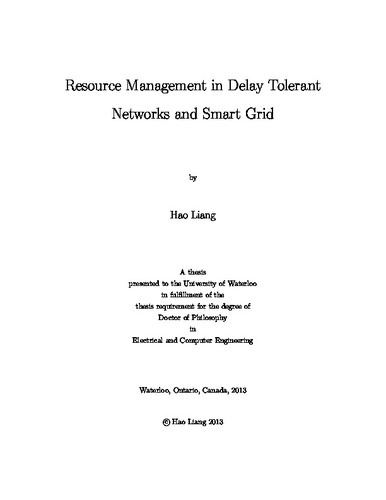 In recent years, significant advances have been achieved in communication networks and electric power systems. Communication networks are developed to provide services within not only well-connected network environments such as wireless local area networks, but also challenged network environments where continuous end-to-end connections can hardly be established between information sources and destinations. Delay tolerant network (DTN) is proposed to achieve this objective by utilizing a store-carry-and-forward routing scheme. However, as the network connections in DTNs are intermittent in nature, the management of network resources such as communication bandwidth and buffer storage becomes a challenging issue. On the other hand, the smart grid is to explore information and communication technologies in electric power grids to achieve electricity delivery in a more efficient and reliable way. A high penetration level of electric vehicles and renewable power generation is expected in the future smart grid. However, the randomness of electric vehicle mobility and the intermittency of renewable power generation bring new challenges to the resources management in the smart grid, such as electric power, energy storage, and communication bandwidth management. This thesis consists of two parts. In part I, we focus on the resource management in DTNs. Specifically, we investigate data dissemination and on-demand data delivery which are two of the major data services in DTNs. Two kinds of mobile nodes are considered for the two types of services which correspond to the pedestrians and high-speed train passengers, respectively. For pedestrian nodes, the roadside wireless local area networks are used as an auxiliary communication infrastructure for data service delivery. We consider a cooperative data dissemination approach with a packet pre-downloading mechanism and propose a double-loop receiver-initiated medium access control scheme to resolve the channel contention among multiple direct/relay links and exploit the predictable traffic characteristics as a result of packet pre-downloading. For high-speed train nodes, we investigate on-demand data service delivery via a cellular/infostation integrated network. The optimal resource allocation problem is formulated by taking account of the intermittent network connectivity and multi-service demands. In order to achieve efficient resource allocation with low computational complexity, the original problem is transformed into a single-machine preemptive scheduling problem and an online resource allocation algorithm is proposed. If the link from the backbone network to an infostation is a bottleneck, a service pre-downloading algorithm is also proposed to facilitate the resource allocation. In part II, we focus on resource management in the smart grid. We first investigate the optimal energy delivery for plug-in hybrid electric vehicles via vehicle-to-grid systems. A dynamic programming formulation is established by considering the bidirectional energy flow, non-stationary energy demand, battery characteristics, and time-of-use electricity price. We prove the optimality of a state-dependent double-threshold policy based on the stochastic inventory theory. A modified backward iteration algorithm is devised for practical applications, where an exponentially weighted moving average algorithm is used to estimate the statistics of vehicle mobility and energy demand. Then, we propose a decentralized economic dispatch approach for microgrids such that the optimal decision on power generation is made by each distributed generation unit locally via multiagent coordination. To avoid a slow convergence speed of multiagent coordination, we propose a heterogeneous wireless network architecture for microgrids. Two multiagent coordination schemes are proposed for the single-stage and hierarchical operation modes, respectively. The optimal number of activated cellular communication devices is obtained based on the tradeoff between communication and generation costs.