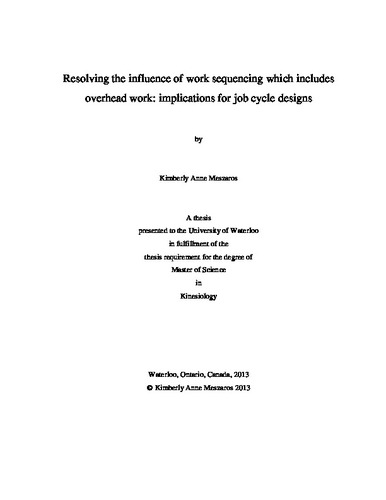 Many industrial workplaces involve tasks that require work to be performed in overhead postures. Epidemiological evidence suggests that working in these unavoidable, awkward postures leads to development of shoulder fatigue, pain and several musculoskeletal disorders. The accumulation of localized muscle fatigue has been strongly associated with the development of work-related musculoskeletal injuries (Armstrong et al., 1993). In order to prevent injury, minimizing muscular fatigue during short-cycled, repetitive work through different work organization schemes has been suggested (Dempsey et al., 2010). Previous research has examined the interactive effect of altering contraction level, duty cycle and cycle times on shoulder muscle fatigue. However, isolation of one factor while maintaining a constant workload has not been examined for overhead work tasks. The purpose of the study was to determine whether cycle time affected the progression of fatigue at the shoulder since the postural load during overhead tasks is inherently fatiguing. Ten university aged females performed a task rotation between an intermittent overhead pressing task and a neutrally located assembly task. Four conditions were defined by cycle time (15s, 30s, 60s and 120s) and each cycle consisted of one complete rotation. In order to quantify the progression of fatigue over time, four dependant measures were systematically collected for all conditions until exhaustion or to a maximum of three hours. These included root mean square (RMS) amplitude and median power frequency (MdPF) calculated from surface electromyography of nine muscles surrounding the shoulder, static strength capability, and rating of perceived exertion. Endurance time was also included as a fifth measure of fatigue. Linear regression was used to determine the slope of static strength and perceived exertion over time, and magnitude changes over normalized time were calculated for EMG measures. For all dependant measures, repeated measures ANOVA were used to identify significant differences across conditions. As the only independent factor investigated, cycle time influenced two out of the five dependent measures. Conditions induced differences in endurance time (F[3,24]=3.96, p=0.02) and RMS amplitude of the middle (F[24,189]=3.10, p<0.0001) and posterior deltoid (F[24,189]=2.52, p=0.0003). Performing overhead work in long cycles (120s) induced a shorter average endurance time (118.67min), and the shortest cycle time (15s) resulted in a longer average endurance time (152.44min). Over time, the rate of increase in RMS amplitude of both deltoid muscles was higher when working at the longest cycle time (120s). Although six muscles showed an indication of fatigue through significant decreases in MdPF in at least one condition, cycle time did not affect MdPF over time for any muscle examined. Similarly, the rate of static strength capability and rating of perceived exertion over time were not affected by cycle time. Two of five measures indicated that cycle time played a significant role in fatigue progression, making its effectiveness as a work organizational method for overhead work tasks unclear. Results indicate that that intermittent overhead work should be performed in shorter cycles to reduce the risk of shoulder injury. Identifying additional effects of cycle time on fatigue measures through increasing statistical power would provide ergonomists with more confidence in recommending this organizational strategy to mitigate the risk of musculoskeletal injury.