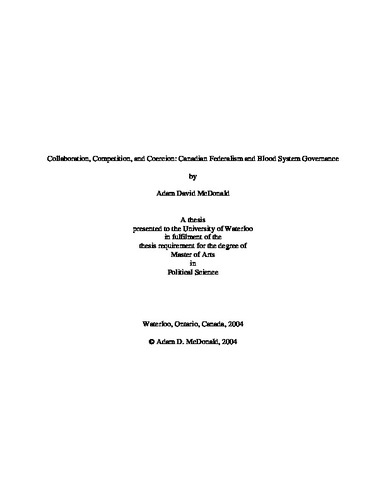 The blood supply occupies a special place within the provincial public health systems: it is something that Canadians expect to be safe, well run, and available when needed. In the 1970s and 1980s, the Canadian blood system dealt with a significant crisis: a tainted blood scandal. The federal <i>Commission of Inquiry into the Blood System in Canada</i> issued a report condemning, among other things, the governance structure of Canada's blood system. As a result, the provincial and federal governments worked to make changes to the way they funded, oversaw, and regulated the blood industry in Canada. It appears that the changes they instituted resulted in an improved blood system and improved the relationship between the governments and the blood system. Traditional models of federalism do not account for how the federal and provincial governments interacted. In their response to a crisis that affected thousands of Canadians, there were elements of collaboration, competition, and coercion. It is possible that a new "mode" of federalism is emerging as a result of these changes; it is more likely, however, that the crisis <i>forced</i> the governments to collaborate and create a national system to supply Canadian needs.