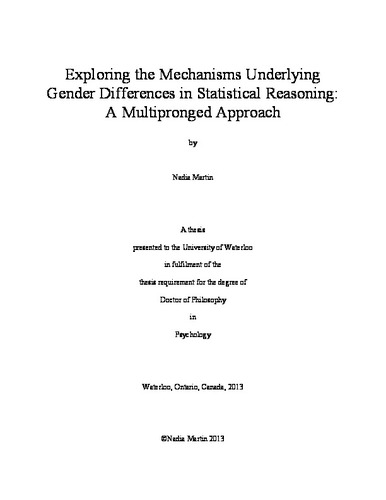 The past two decades have seen a substantial increase in the availability of numerical data that individuals are faced with on a daily basis. In addition, research uncovering the multiple facets of statistical reasoning has become increasingly prominent. Both gender differences and the effect of experience or training have emerged as two key factors that influence performance in statistics. Surprisingly, though, the combined effects of these two variables have not been studied. This gap in understanding the joint effect of gender and experience on statistical reasoning is addressed in the present dissertation with six studies. In Study 1 (N = 201), participants with various levels of experience in statistics were asked to complete the Statistical Reasoning Assessment (SRA; Garfield, 2003). Although the performance of both genders improved with experience, the gender gap persisted across all experience levels. Multiple measures of individual differences were used in a confirmatory structural equation model. This model supported the idea that differences in statistical reasoning are not uniquely a matter of cognitive ability. In fact, gender was found to influence statistical reasoning directly, as well as indirectly through its influence on thinking dispositions. In Studies 2 (N = 67), 3 (N = 157), and 4 (N = 206), the role of stereotype threat was examined as a potential cause of the persisting gender gap in statistics, and value affirmation was tested as an intervention to overcome stereotype threat. Despite the fact that many women believed negative stereotypes about the ability of women in statistics, value affirmation had no significant impact on performance. To help explain this lack of effect, and in keeping with the results of the structural equation model suggesting a multi-pronged approach, efforts were turned towards a different (and potentially richer) cognitive factor. Specifically, mental representations were explored to help shed light on the root causes of those conceptual understanding differences in statistics. In Studies 5 and 6, gender differences in mental representations of statistical features were examined using a categorization paradigm. In Study 5 (N = 219), extending some of the key findings in Studies 1, 3 and 4, it was established that two courses in statistics are necessary to create a significant difference in the quality of mental representations of statistical concepts. More importantly, Study 6 (N = 208) demonstrated how constraining the task format particularly benefits women in that the quality of their reasoning significantly improved, where that of men was equal across tasks. Theoretical and practical implications of these findings are discussed.