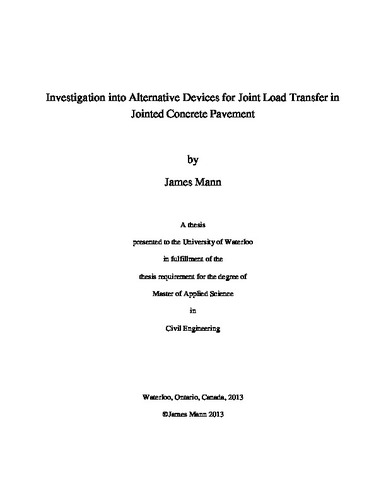 Conventional construction of Jointed Plain Concrete Pavements (JPCP) in Canada consists of placing a round steel epoxy-coated dowel at the mid height of the pavement. Steel dowels reduce stepping at the joint to improve comfort and reduce the stress concentration on the support layer beneath the pavement. Most importantly they transfer load and are commonly referred to as load transfer devices. Problems with dowel bar deterioration, including corrosion causes the slab joint to lock and cause stress concentrations as the slab expands and or contracts and curls due to thermal and shrinkage straining occurring in the concrete. In this research, alternative joint load transfer devices are presented and compared to conventional steel dowels. Four device alternatives are developed and evaluated: a Glass Fibre Reinforced Polymer (GFRP) I-beam placed directly on the base material; GFRP tapered plates; a continuous horizontal V device; and a continuous horizontal pipe device both placed directly on the support layer. The two devices that are continuous run the length of the joint similar to a shear key. The GFRP tapered plate and I-beam, as well as conventional steel dowels, were analyzed in a wheel path sized three dimensional finite element model for wheel loading and static loading applied to either side of the joint. An experimental testing program was developed to test joint load transfer capabilities of each device when subjected to a static wheel load applied to either side of the joint. The GFRP tapered plates and I-beams were shown to transfer load based on the results from the wheel path finite element model and experimental testing program. The differential joint deflection, stress concentrations and plastic straining occurring in the concrete is not reduced with either the tapered plate or I-beam compared to a dowel under wheel loading. In addition, a similar plastic straining area identified in the finite element models were noticed as an area of damage in the experimental testing program. All of the devices developed are analyzed in a quarter slab three dimensional finite element model with shrinkage and thermal strains as well as wheel loading applied to the slab to simulate service loading. A detailed investigation into the stress distribution around the devices and the differential deflection at the joint through the service loading applied is presented in this paper. Similarly to the wheel path investigation the stress concentration in the tapered plate and I-beams are greater than conventional dowels and also have greater differential deflection occurring at the joint. Both the continuous Horizontal V and Horizontal Pipe device reduce stress and plastic straining in the concrete during the service load analysis compared to dowels. During daytime wheel loading the differential deflection in the joint is the lowest with no noticeable stepping occurring at the joint with the Horizontal V device; however is greater than conventional steel dowels under nighttime wheel load application. The differential deflection with the Horizontal Pipe during day and night straining and wheel loading is similar to conventional steel dowels.