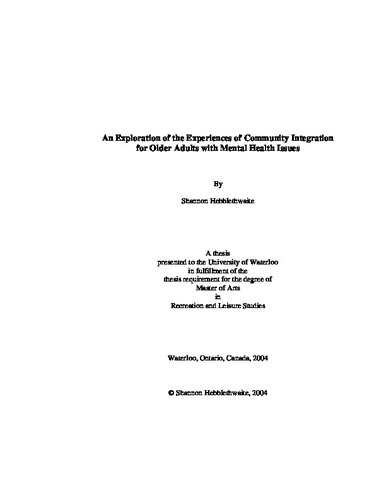 Community integration is vital for older adults with mental health issues, both as a process and as an outcome. The process of deinstitutionalization has made community integration a primary concern for these individuals. Many researchers recognize the significant lack of community resources that have been established in order to accommodate individuals with mental health issues in the community (Davidson, Hoge, Godleski, Rakfeldt, & Griffith, 1996; Pedlar, 1992). Researchers and practitioners alike, however, lack a thorough understanding of the factors that contribute to the successful and lasting community reintegration of older adults with mental health issues. The purpose of this study was to provide an in-depth analysis of the experience of community integration for older adults with mental health issues. The study was guided by the conceptual framework of phenomenology, focusing on the lived experiences of these individuals (Patton, 2002). Utilizing qualitative methods, data collection consisted of semi-structured interviews, oral member checks and the maintenance of a reflexive journal. Participants in the study were five older adults who had been diagnosed with a psychiatric disorder, had received treatment on an inpatient geriatric psychiatry unit, and had returned to their homes in the community upon discharge from the hospital. The findings suggest that being healthy and concomitantly maintaining independence played a key role in the process of community integration for these older adults. Independence, from the perspective of these individuals was quite different from the definitions of independence commonly used in North American society. The older adults in this study did not adhere to the principles of autonomy and individualism in relation to independence. Instead, they accepted a certain degree of dependence in order to prevent or avoid future disability, relapse, and readmission to hospital. A number of factors contributed to their independence, both positively and negatively, including: being healthy; social support; a smooth transition from hospital to community; maintaining feelings of self-worth; solitude; the power of knowledge; feelings of burden; and managing stress. These findings point to an emerging model of community integration that incorporates the concepts of empowerment, recovery, inclusion, and independence. The experience of independence, as described by these individuals, evoked feelings of empowerment and was strongly associated with the concept of recovery. For these older adults, being healthy, and thus, independent, meant being integrated. The findings, as well as the process of conducting this research, have lead to a number of recommendations for future research and suggestions for practitioners and policy makers involved with these older adults.

Shannon Hebblethwaite (2004). An Exploration of the Experiences of Community Integration for Older Adults with Mental Health Issues. UWSpace. http://hdl.handle.net/10012/730