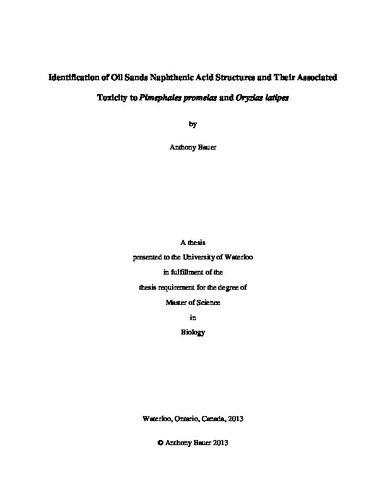 The oil sands, located in north-eastern Alberta, are one of the largest deposits of oil worldwide. Because the Alberta Environmental Protection and Enhancement Act prohibits the release of oil sands process-affected material into the environment, industry is storing vast quantities of tailings on mine lease sites. The oil sands industry is currently accumulating tailings waste at a rate of >105 m3/day, for which reclamation strategies are being investigated. Naphthenic acids (NAs) have been identified as the most toxic component of oil sands tailings as they are considered acutely toxic to a variety of biota, and are therefore a target contaminant for tailings pond reclamation strategies. Current literature based on Microtox® assays (marine bacteria Vibrio fischeri) suggests that lower molecular weight NAs are more toxic than higher molecular weight NAs. The following thesis involves the utilization of NA fractions and their relative toxicities to determine if NA toxicity is related to NA molecular weight. A previous study generated an oil sands-derived naphthenic acid extract (NAE), which was fractionated by distillation at stepped temperatures, yielding five fractions with increasing median molecular weights (Daltons). In the present study, the same extract and five fractions were utilized. To expand on the earlier characterization which involved a low resolution electrospray ionization mass spectrometry (ESI-MS), the whole extract and five fractions were analysed using electrospray ionization high-resolution mass spectrometry (ESI-HRMS) and synchronous fluorescence spectroscopy (SFS). Mean molecular weights were generated for each fraction, and an increase in molecular weight with increasing fraction number was confirmed. Respective mean Daltons and relative proportions for each fraction are as follows: 237 and 11.9 % (fraction 1), 240 and 32.3% (fraction 2), 257 and 33.4% (fraction 3), 308 and 16.8% (fraction 4), and 355 and 5.6% (fraction 5). When chemical analyses of fractions were compared, it was determined that structures contributing to increased molecular weight included increased cyclic structures (up to 7-ring structures), aromaticity (mono- and diaromatics), nitrogen, sulfur, and oxygen heteroatoms, and dihydroxy/dicarboxy compounds. In addition, characterization data suggested the presence of NAs exhibiting estrogenic structures. Following chemical characterization, NA fractions were subject to embryo/larval bioassays using two fish species: Oryzias latipes (Japanese medaka) and Pimephales promelas (fathead minnow). Endpoints evaluated were mortality, time to hatch, hatch length, and abnormalities. Results suggest that relative NA fraction toxicity is not related to molecular weight, as no trend relating mean Dalton weight to toxicity was observed for any endpoint in both species. Acute toxicity data indicated differences between fractions as high as 2-fold, although results were species-dependent. Fraction 1 displayed the lowest potency (highest LC50) for both Japanese medaka (0.291 mM) and fathead minnow (0.159 mM). Fractions 3 and 2 for Japanese medaka (0.149 and 0.157 mM, respectively), and fractions 5 and 2 for fathead minnow (0.061 and 0.080 mM, respectively) displayed the greatest potencies for mortality (lowest LC50). When fraction LC50s for Japanese medaka were compared to the whole NAE (0.143 mM), the mid molecular weight fractions (fractions 2 and 3) appeared most similar to the whole NA. . In terms of relative toxicity and proportion, constituents in the mid molecular range fractions (2 and 3) likely represent greater risk compared to other fractions, and further chemical and toxicological characterization of constituents within these fractions is warranted particularly for long-chained, monocarboxylic acids, with low aromaticity. Japanese medaka and fathead minnow varied in their sensitivity and their relative response to different fractions. In general, fathead minnow were more sensitive than Japanese medaka based on lower estimates of LC50 and threshold (growth) values in addition to the presence of developmental abnormalities (predominately yolk sac edema) associated with a few of the fractions. Compared to differences in toxicity between fractions for a given species (>2-fold for fathead minnow), there was more variability between species for a given fraction (> 3-fold for fraction 5). Also, the relative toxicity of fractions as indicated in the present study is contrary to the results generated using Vibrio fischeri for the same fractions. Thus, there is a need for multi- endpoint and species toxicity evaluations to assess the efficacy of remediation and reclamation options for reducing toxicity of oil sands tailings.