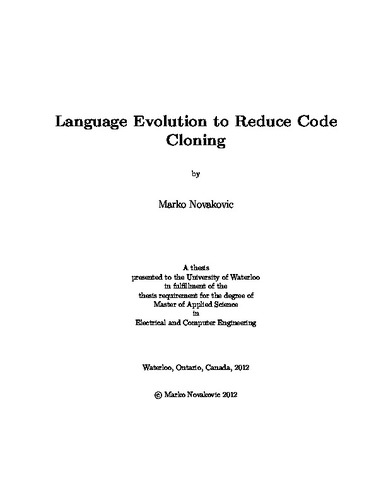 Domain-specific languages can significantly speed up the development of software applications. However, it usually takes a few iterations of the language design before it achieves such power. At the same time, many domains tend to evolve quite often today, which implies that domain-specific languages have to evolve accordingly. Thus, being able to evolve a language in a painless manner is crucial. Unfortunately, current state-of-the-art research does not provide enough answers on how to efficiently evolve domain-specific languages. We present an approach to evolving a language in order to reduce the amount of code cloning it introduces. The approach specifically targets those languages whose design causes users to create many duplicated code segments. We target domain-specific languages as they tend to be more challenging to evolve due to their specifics, but the approach may be applicable to general purpose programming languages as well. The approach was tested on a real-world domain-specific language that is used in a financial domain. We proposed three improvements and current users helped us evaluate them. We found that the proposed improvements would reduce code cloning, which provides evidence that the approach can be used in a real-world environment. Furthermore, this work provides a solid basis for further research in the area of application of code cloning detection results. In particular, code cloning detection results and the ideas we presented show potential to be extended and used to facilitate domain analysis.