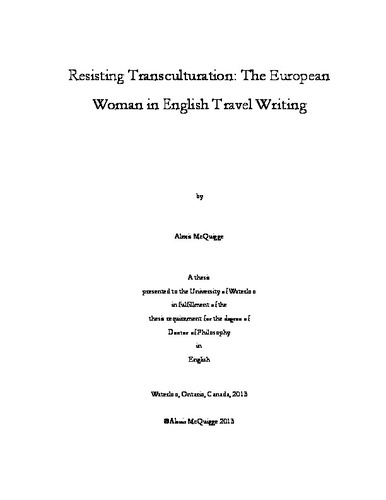 Comprised of four separate case studies – one on the Eastern novels of Penelope Aubin and Eliza Haywood written in the 1720’s, one on Lady Mary Wortley Montagu’s Turkish Embassy Letters, one that features female castaway narratives of the later eighteenth century, and a fourth on Isabel Burton’s public mediation of her husband’s writing and the transgressions of her own life – this work argues that discursive constructions of female travel were frequently challenged by women writers and female travelers themselves. Engaging with critics like Amanda Vickery, Robert Shoemaker, and Alison Conway, who wish to call our totalizing, homogenous views of the restrictions placed on women’s lives in the eighteenth and nineteenth centuries into question, this dissertation argues that despite the prevalence of works arguing against female travel because it was either too dangerous or too sexually liberating, many women conceived of themselves as not only able to travel but to do so while remaining loyal to British notions of civility and cultural purity. At the same time, the texts studied here demonstrate that, once freed from the restrictive confines of British society, English women were able to make important contributions to Britain’s imperial and mercantile goals overseas that men were unable to make. In this work I examine the ways in which domestic and sexual violence at home prompted the construction of travel as an escape to a fantasy of easy female circulation in less-restrictive public spaces where women could manage their own fates, or indeed spaces in which they were free from the seemingly constant fear of sexual assault at the hands of European men. Travel – in the case of Lady Mary Wortley Montagu and Isabel Burton – offered women an opportunity to transform notions of femininity into ways of making particular and unique claims to knowledge because they had access to information male travelers could not gain. Rather than descending into lust or various forms of cultural degeneration, traveling women in the eighteenth and nineteenth centuries opened up a space for women after them to make significant contributions to scientific and ethnographic discourse. The work on fictional female captives and castaways in the first and third chapters of this dissertation indicates that the supposedly corrupting qualities of the “torrid zones” were ones easily fended off by English women, who were thus able to demonstrate that female interactions with so-called ‘male’ spheres of mercantile exchange, seafaring, and captivity abroad could result in greater freedom for women to travel. These texts also highlight the important contributions women could make to public life in England as a result of the knowledge gained during their periods overseas. In every chapter, this work examines the way that violence against women – and the powerlessness of women to counteract it – was a seemingly constant concern during the period Finally, my conclusion gestures toward the possible continuities between ideas about female travel in the eighteenth and nineteenth centuries and the twenty-first century. Though much more work is required, I conclude that, from the very brief research I have conducted on the subject, it appears that the inroads made by Aubin, Haywood, Montagu, Burton and others have largely been destroyed by a continual concern with the safety and sexual propriety of the Western woman overseas.