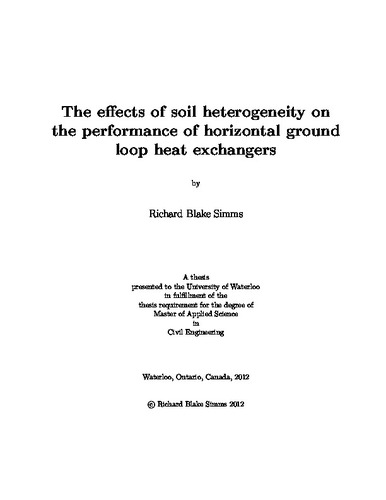 Horizontal ground loop heat exchangers (GLHE) are widely used in many countries around the world as a heat source/sink for building conditioning systems. In Canada, these systems are most common in residential buildings that do not have access to the natural gas grid or in commercial structures where the heating and cooling loads are well balanced. These horizontal systems are often preferred over vertical systems because of the expense of drilling boreholes for the vertical systems. Current practice when sizing GLHEs is to add a considerable margin of safety. A margin of safety is required because of our poor understanding of in situ GLHE performance. One aspect of this uncertianty is in how these systems interact with heterogeneous soils. To investigate the impact of soil thermal property heterogeneity on GLHE performance, a specialized finite element model was created. This code avoided some of the common, non-physical assumptions made by many horizontal GLHE models by including a representation of the complete geometry of the soil continuum and pipe network. This model was evaluated against a 400 day observation period at a field site in Elora, Ontario and its estimates were found to be capable of reaching a reasonable agreement with observations. Simulations were performed on various heterogeneous conductivity fields created with GSLIB to evaluate the impact of structural heterogeneity. Through a rigorous set of experiments, heterogeneity was found to have little effect on the overall performance of horizontal ground loops over a wide range of soil types and system configurations. Other variables, such as uncertainty of the mean soil thermal conductivity, were shown to have much more impact on the uncertainty of performance than heterogeneity. The negative impact of heterogeneity was shown to be further minimized by: maintaining a 50 cm spacing between pipes in trenches; favouring multiple trenches over a single, extremely long trench; and/or using trenches greater than 1 m deep to avoid surface effects.