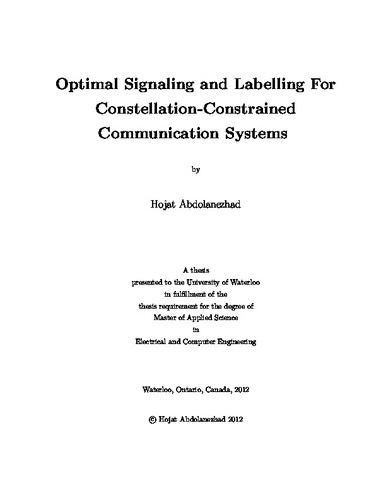 Most communication systems use a finite signal set as their alphabet set to form a codebook to transmit data over a communication channel in a reliable fashion. The problem with Conventional methods which implement Coded Modulation (CM) schemes such as Trellis Coded Modulation or Multi-level Coding Multi-Stage Decoding is their complexity of dealing with codes with different rates in each level which makes the design and implementation a difficult task. One simple way to implement Coded Modulation is Bit-Interleaved Coded Modulation (BICM) which uses only a single binary encoder to transmit data. Although BICM is a suboptimal scheme compared to CM, its simplicity, from a practical point of view, is a great motivation to design BICM scheme achieving rates close to those obtained by CM. Lots of efforts have been taken place in the past twenty years to design optimal constellation for different snr regimes in CM under various constraints. Some of them are revisited in this study. A novel approach, called Adjustable Weights Model (AWM), will be presented to design constellations which work very well in both CM and BICM schemes. The model also induces a particular labelling on the constellation. In this work, some properties of AWM are studied. AWM is used to facilitate design of near optimal signalling for CM and BICM schemes. An optimization problem is formed to find the optimal parameters of the proposed model. Global optimization methods are used to solve the optimization problems. It is shown that the optimal points are always on the boundary of the domain by using data processing inequality . Some suboptimal solutions are provided by moment and cumulants matching techniques. The model has the ability to produce different constellations by adjusting its weights. It is well established that the optimal constellation for high snr region is equillattice. This model also converges to an equillattice constellation in high snr region. Number of nonzero weight parameters in the model can vary according to snr, help us to circumvent the saturation problem with conventional CM scheme. BICM capacity is presented and its relation with CM capacity is discussed. BICM capacity, as a function of snr, is expanded around zero snr. Different constellations and their labeling can be characterized based on the coefficients in the Taylor expansion. The most important difference between CM and BICM is the effect of labelling in the former scheme. Labelling is irrelevant in CM, but greatly influences the system performance in BICM. Effect of labelling and how to search for optimal labeling is part of this study. It is shown that AWM is optimal at medium and low snr regimes. The model coupled with its underlying labelling is first order optimal. Although Gray labelling is optimal at high snr, it is not optimal in the low snr regime. Higher order optimal constellations are defined to be the constellations that have more than one coefficient in their Taylor expansion matched with CM capacity coefficients. It gives us a powerful tool to study constellation in medium snr regime which has not been already discovered. In addition, optimality criterion is provided.