The Use of Temperature and Environmental Isotopes as Tools to Characterize Groundwater Discharge to the Grand River, Ontario, Canada 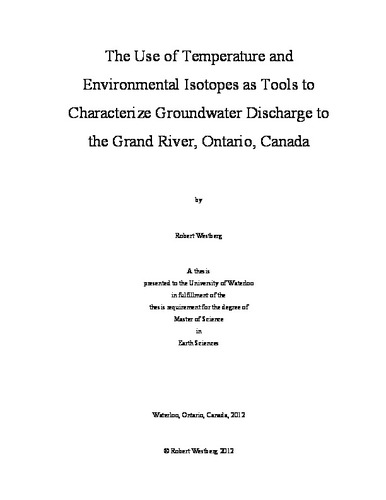 The Grand River Watershed, in southern Ontario, is home to approximately 900,000 people and one of the fastest growing regions in Canada; specifically, in the urban areas of Guelph, Cambridge, Kitchener, and Waterloo. This growth strains the watershed’s capacity to supply adequate water resources to these municipalities, as well as manage the waste-water treatment effluent discharged from them. Nowhere in the watershed is this juxtaposition in water resource function more apparent than at the city of Brantford, with a population of approximately 100,000 people. Located forty-two kilometers downstream from the major urban areas, Brantford is unique in the watershed in that it obtains its entire municipal water supply directly from the Grand River, into which the upstream municipalities discharge 77% of the total waste-water treatment plant effluent emitted to the watershed. One contaminant of concern is nitrate, which, for decades, has been linked to numerous human and aquatic health complications. The input of nitrate from these upstream WWTP’s is considerable; the WWTP’s have a combined flow rate of 2.3 m3s-1, and a mean nitrate concentration of 10.4 mg N·L-1 (data from Anderson, 2012). As a comparison, the Nith River, the largest tributary to the Grand River between Cambridge and Brantford, has a summer baseflow of 2.9 m3s-1 and, from 2000 to 2004, had a mean nitrate concentration of 4.4 mg N·L-1 (Cooke, 2006). Brantford, in addition to treating their water supply, relies on the dilution of in-stream nitrate from groundwater that is thought to discharge along the Grand between Cambridge and the Brantford municipal water intake. This 40-km reach of the Grand River is colloquially referred to as either the discharge reach or the recovery reach. Recent data from various authors indicate that groundwater may not always act to dilute in-stream nitrate from upstream WWTPs (Encalata, 2008; Pastora, 2009; Rosamond 2009). The main objective of the research completed in this thesis was to refine the conceptual model of groundwater/surface water interaction along the Grand River between Cambridge and Brantford. Refinement of this conceptual model was accomplished in two parts. First, groundwater discharge, from bank seepage and direct discharge through the riverbed, was located using a variety of methods; a simple reconnaissance survey by canoe, a FLIR thermography survey, drag probe surveys, and a temperature profiling method. Then domestic wells, seeps, tributaries, riverbed discharge, and WWTP effluent were sampled to geochemically characterize inputs to the Grand River.

Robert Eric Westberg (2013). The Use of Temperature and Environmental Isotopes as Tools to Characterize Groundwater Discharge to the Grand River, Ontario, Canada. UWSpace. http://hdl.handle.net/10012/7280