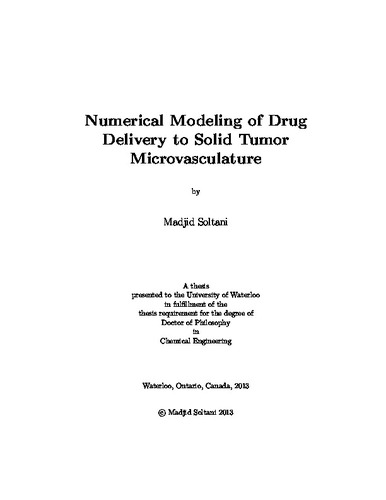 Modeling interstitial fluid flow involves processes such as fluid diffusion, convective transport in the extracellular matrix, and extravasation from blood vessels. In all of these processes, computational fluid dynamics can play a crucial role in elucidating the mechanisms of fluid flow in solid tumors and surrounding tissues. To date, microvasculature flow modeling has been most extensively studied with simple tumor shapes and their capillaries at different levels and scales. With our proposed numerical model, however, more complex and realistic tumor shapes and capillary networks can be studied. First, a mathematical model of interstitial fluid flow is developed, based on the application of the governing equations for fluid flow, i.e., the conservation laws for mass and momentum, to physiological systems containing solid tumors. Simulations of interstitial fluid transport in a homogeneous solid tumor demonstrate that, in a uniformly perfused tumor, i.e., one with no necrotic region, the interstitial pressure distribution results in a non-uniform distribution of drug particles. Pressure distribution for different values of necrotic radii is examined, and two new parameters, the critical tumor radius and critical necrotic radius, are defined. In specific ranges of these critical dimensions the interstitial fluid pressure is relatively lower, which in turn leads to a diminished opposing force against drug movement and a subsequently higher drug concentration and potentially enhanced therapeutic effects. In this work, the numerical model of fluid flow in solid tumors is further developed to incorporate and investigate non-spherical tumor shapes such as prolate and oblate ones. Using this enhanced model, tumor shape and size effects on drug delivery to solid tumors are then studied. Based on the assumption that drug particles flow with the interstitial fluid, the pressure and velocity maps of the latter are used to illustrate the drug delivery pattern in a solid tumor. Additionally, the effects of the surface area per unit volume of the tissue, as well as vascular and interstitial hydraulic conductivity on drug delivery efficiency, are investigated. Using a tumor-induced microvasculature architecture instead of a uniform distribution of vessels provides a more realistic model of solid tumors. To this end, continuous and discrete mathematical models of angiogenesis were utilized to observe the effect of matrix density and matrix degrading enzymes on capillary network formation in solid tumors. Additionally, the interactions between matrix-degrading enzymes, the extracellular matrix and endothelial cells are mathematically modeled. Existing continuous and discrete models of angiogenesis were modified to impose the effect of matrix density on the solution. The imposition has been performed by a specific function in movement potential. Implementing realistic boundary and initial conditions showed that, unlike in previous models, the endothelial cells accelerate as they migrate toward the tumor. Now, the tumor-induced microvasculature network can be applied to the model developed in Chapters 2 and 3. Once the capillary network was set up, fluid flow in normal and cancerous tissues was numerically simulated under three conditions: constant and uniform distribution of intravascular pressure in the whole domain, a rigid vascular network, and an adaptable vascular network. First, governing equations of sprouting angiogenesis were implemented to specify the different domains for the network and interstitium. Governing equations for flow modeling were introduced for different domains. The conservation laws for mass and momentum, Darcy’s equation for tissue, and a simplified Navier Stokes equation for blood flow through capillaries were then used for simulating interstitial and intravascular flows. Finally, Starling’s law was used to close this system of equations and to couple the intravascular and extravascular flows. The non-continuous behavior of blood and the adaptability of capillary diameter to hemodynamics and metabolic stimuli were considered in blood flow simulations through a capillary network. This approach provided a more realistic capillary distribution network, very similar to that of the human body. This work describes the first study of flow modeling in solid tumors to realistically couple intravascular and extravascular flow through a network generated by sprouting angiogenesis, consisting of one parent vessel connected to the network. Other key factors incorporated in the model for the first time include capillary adaptation, non-continuous viscosity blood, and phase separation of blood flow in capillary bifurcation. Contrary to earlier studies which arbitrarily assumed veins and arteries to operate on opposite sides of a tumor network, the present approach requires the same vessel to run and from the network. Expanding the earlier models by introducing the outlined components was performed in order to achieve a more-realistic picture of blood flow through solid tumors. Results predict an almost doubled interstitial pressure and are in better agreement with human biology compared to the more simplified models generally in use today.