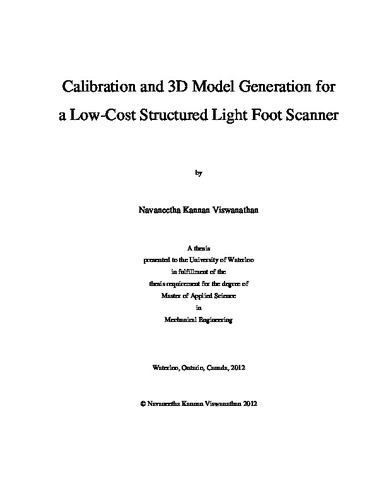 The need for custom footwear among the consumers is growing every day. Serious research is being undertaken with regards to the fit and comfort of the footwear. The integration of scanning systems in the footwear and orthotic industries have played a significant role in generating 3D digital representation of the foot for automated measurements from which a custom footwear or an orthosis is manufactured. The cost of such systems is considerably high for many manufacturers due to their expensive components, complex processing algorithms and difficult calibration techniques. This thesis presents a fast and robust calibration technique for a low-cost 3D laser scanner. The calibration technique is based on determining the mathematical relationship that relates the image coordinates to the real world coordinates. The relationship is determined by mapping the known real world coordinates of a reference object to its corresponding image coordinates by multivariate polynomial regression. With the developed mathematical relationship, 3D data points can be obtained from the 2D images of any object placed in the scanner. An image processing script is developed to detect the 2D image points of the laser profile in a series of scan images from 8 cameras. The detected 2D image points are reconstructed into 3D data points based on the mathematical model developed by the calibration process. Following that, the output model is achieved by triangulating the 3D data points as a mesh model with vertices and normals. The data is exported as a computer aided design (CAD) software readable format for viewing and measuring. This method proves to be less complex and the scanner was able to generate 3D models with an accuracy of +/-0.05 cm. The 3D data points from the output model were compared against a reference model scanned by an industrial grade scanner to verify and validate the result. The devised methodology for calibrating the 3D laser scanner can be employed to obtain accurate and reliable 3D data of the foot shape and it has been successfully tested with several participants.