The Cohomology Ring of a Finite Abelian Group 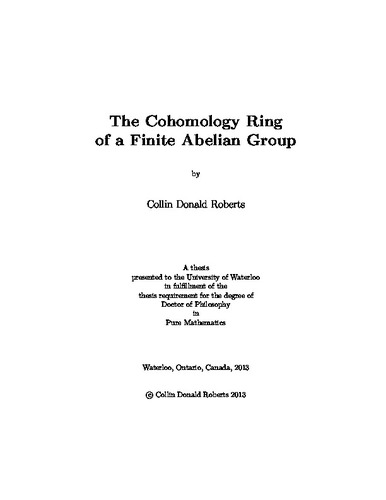 The cohomology ring of a finite cyclic group was explicitly computed by Cartan and Eilenberg in their 1956 book on Homological Algebra. It is surprising that the cohomology ring for the next simplest example, that of a finite abelian group, has still not been treated in a systematic way. The results that we do have are combinatorial in nature and have been obtained using "brute force" computations. In this thesis we will give a systematic method for computing the cohomology ring of a finite abelian group. A major ingredient in this treatment will be the Tate resolution of a commutative ring R (with trivial group action) over the group ring RG, for some finite abelian group G. Using the Tate resolution we will be able to compute the cohomology ring for a finite cyclic group, and confirm that this computation agrees with what is known from Cartan-Eilenberg. Then we will generalize this technique to compute the cohomology ring for a finite abelian group. The presentation we will give is simpler than what is in the literature to date. We will then see that a straightforward generalization of the Tate resolution from a group ring to an arbitrary ring defined by monic polynomials will yield a method for computing the Hochschild cohomology algebra of that ring. In particular we will re-prove some results from the literature in a much more unified way than they were originally proved. We will also be able to prove some new results.