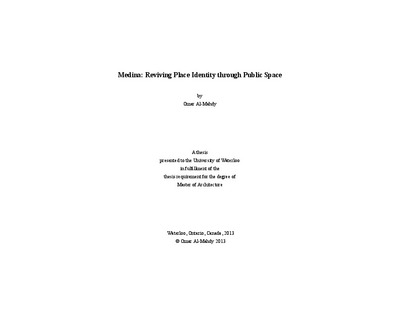 Medina, as the second holy city for Muslims around the world and a place where the Prophet (peace be upon him) lived and is buried, has a distinctive identity. On the contrary, however, the central part of the city, the area where the old city was located, has lost its traditional identity in favour of globalization and modernization. One major factor that affects a location’s sense of place is the absence of public space and green space. In other words, the negligence of the public space’s role in reviving and restoring the identity of a place results in a sense of non-place. For many visitors to Medina, the current state (the contemporary urban setting) of the central city fails to match their expectations. Inserting an urban park (public space) within the area will enhance and help conserve the place’s identity, meet visitors’ visions, and allow more social interactions among visitors and locals. My design proposal is to create an urban park and a public space located at the periphery of the Prophet’s Mosque. The park will offer visitors a quiet place of refuge within the busy surrounding urban context and will demonstrate the location’s identity through shading structures. The program will consist of shading structures, mobile eateries, seating areas, public space, and vegetation.