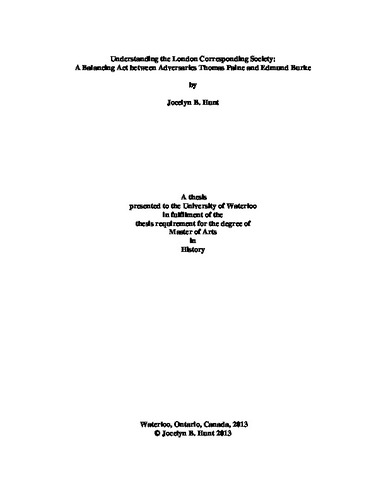 This thesis examines the intellectual foundation of the London Corresponding Society’s (LCS) efforts to reform Britain's Parliamentary democracy in the 1790s. The LCS was a working population group fighting for universal male suffrage and annual parliaments in a decade that was wrought with internal social and governmental tension. Many Britons, especially the aristocracy and those in the government, feared the spread of ideas of republicanism and equality from revolutionary France and responded accordingly by oppressing the freedom of speech and association. At first glance, the LCS appears contradictory: it supported the hierarchical status quo but fought for the voice and representation of the people; and it believed that the foundation for rights was natural but also argued its demands for equal rights were drawn from Britain’s ancient unwritten constitution. This thesis contextualizes these ideas using a contemporary debate, the Burke-Paine controversy, as Edmund Burke was the epitome of eighteenth century conservative constitutionalism in Reflections on the Revolution in France while Thomas Paine’s Rights of Man represented a Lockean interpretation of natural rights and equality. Thus using Reflections and Rights of Man as a framework, this thesis demonstrates that the LCS thoroughly understood its demands for parliamentary reform and uniformly applied its interpretation of natural rights and equality to British constitutionalism and the social and governmental hierarchies.