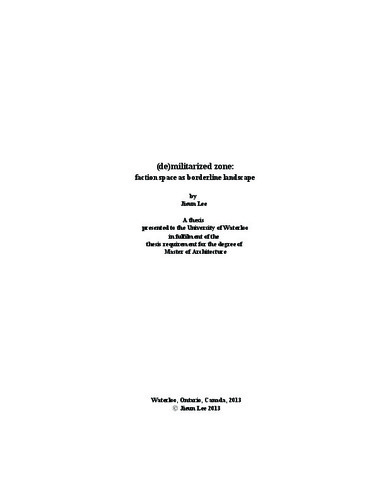 Tension has been the most significant and constant factor in the relationship between North and South Korea over the past sixty years. The differences in the political systems and the economic disparity between the two countries have resulted in what was once one nation moving in two radically divergent directions. These differences have led to a state of imbalance and resulted in constant political instability that has been playing out within the boundaries of the two countries, explicitly in no-man’s land, the demilitarized zone (DMZ). As one of the world’s most heavily militarized borderline, the DMZ embodies a wide range of political and social tensions. Among these is the action-reaction relationship between the Imnam Dam of North Korea and the Peace Dam of South Korea; the Imnam Dam was built as an act of offence to flood Seoul by bombing the dam down, and the Peace Dam was built as an act of defense to prevent overflow of water into Seoul. The historical and present conditions of this relationship maximize the military limitations and the possibilities of greater exchange between the two Koreas in creating a mutually beneficial relationship. In this thesis, this relationship is realized through “faction space”, a specific space situated in a fictional reality that does not reflect on its immediate surroundings, but of its own world, a speculative fictional idea of what it could become. Four different types of borderline conditions are studied to find out how these conditions can be translated into opportunities of creating spaces not only for the military, but also for the public. Each condition focuses on a topic derived from the existing surroundings. The final faction spaces perform as architectural stimuli within the feuding landscape of the two Koreas, striving to relieve or intensify the social and political tension between each other. Conditions of these faction spaces may begin to exist in various places around the DMZ, redefining the borderscape. A time may come when the most heavily militarized zone in the world shifts its focus to become a space for reciprocity.