Perceptions of Repatriation: An anthropological examination of the meaning behind repatriating human remains in Canada 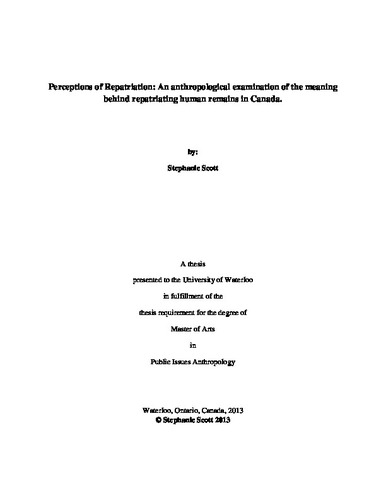 The repatriation of Aboriginal human remains is still a debated issue in some forums. However, among many Canadian museums and other institutions, repatriation of ancestral remains is no longer a debate. It has become part of an obligation institutions have to ‘decolonize’ their collections. While the question concerning whether repatriation is ‘the right thing to do’ has been recognized in most North American museums, trying to decide the best method to return the remains is still undecided. In examining how perceptions of human remains have changed in the Anglo-European, Haida and Ojibway cultures, an explanation of the importance of repatriation emerges. This thesis analyses how changes in perception have impacted the acceptance of repatriation among museums and other institutions and produced a discourse concerned with returning all Aboriginal remains back to Native communities. By analysing the experiences and opinions of 14 stakeholders in repatriation (collected during in-person and telephone conversations as well as open-ended questionnaires) I was able to garner a general opinion on the status of repatriation in Canada. It was found that the current method Canadian institutions employ to repatriate Aboriginal human remains adequately addresses the issue. Flaws are found in all methods of repatriation; however, presently, negotiations based on mediation and not litigation produce more valuable consultation relationships, more cooperation between institutions and Native groups, and a more beneficial repatriation experience.

Stephanie Scott (2013). Perceptions of Repatriation: An anthropological examination of the meaning behind repatriating human remains in Canada. UWSpace. http://hdl.handle.net/10012/7257