Development of Advanced Thin Films by PECVD for Photovoltaic Applications 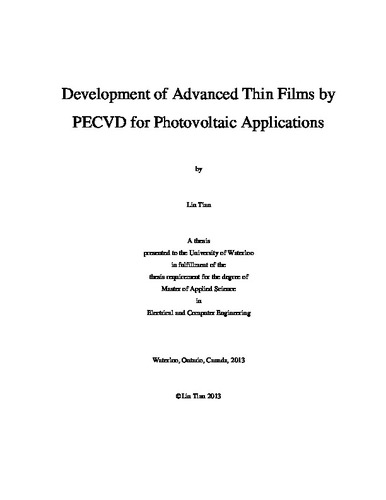 Compared to wafer based solar cells, thin film solar cells greatly reduce material cost and thermal budget due to low temperature process. Monolithically manufacturing allows large area fabrication and continuous processing. In this work, several photovoltaic thin films have been developed by rf-PECVD including a-Si:H and μc-Si, both intrinsic and doped on Corning 4 inch glass substrate at low temperature. The conductivity of n type and p type μc-Si at 180ºC was 17S/cm and 7.1E-2S/cm, respectively. B dopants either in a-Si:H or μc-Si films require higher plasma power to get active doping. The B2H6-to-SiH4 flow ratio for p type μc-Si lies from 0.01 to 0.025. Chamber conditions have critical effect on film quality. Repeatable and superior results require a well-established cleaning passivation procedure. Moreover, μc-Si films have been deposited from pure silane on glass substrate by modified rf-ICP-CVD. The deposition rate has been dramatically increased to 5Å/s due to little H2 dilution with crystalline fraction was around 69%, and 6.2Å/s with crystalline fraction 45%. Microstructure started to form at 150ºC with a thin incubation layer on the glass substrate, and became fully dense conical conglomerates around 300nm where conductivity and crystallinity saturated. Additionally, a-SiGe:H films have been developed by modified rf-ICP-CVD. The optical band gaps have been varied from 1.25 to 1.63eV by changing SiH4-to-GeH4 ratio. Also high temperature resulted in low bandgap. Cross-section TEM showed some microcrystllites appeared near interface region. Heterojunction solar cells on p type c-Si wafer have been fabricated using films developed in this thesis. Interference fringes in EQE disappeared on either textured substrate or cells with lift-off contacts. Maximum EQE was 87% around 700nm. I-V curves have also been studied where the interesting kink suggests a counter-diode has formed between emitter region and contacts.