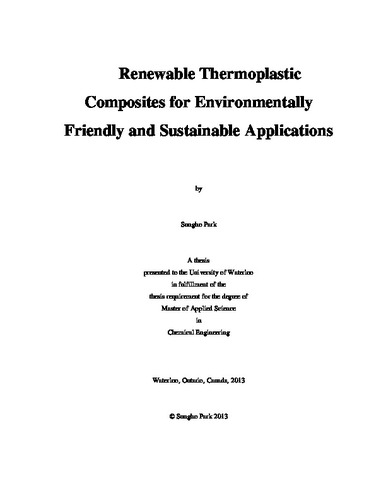 Thermoplastic composites using natural fibres are studied intensively and widely used in applications including automotive, packaging, consumer goods and construction. Good balance of mechanical properties, processability and low cost are great advantages of these materials on top of the environmental benefits. Recently, there have been various efforts to amplify the positive effects on the environment by replacing the conventional polymers by bio-derived renewable polymers in the composites. Recent studies conducted from our research group showed competitiveness of plant fibre-thermoplastic composites. Implementing the promising results and experience, a new composite design using renewable polyethylene as the matrix material was studied. This polyethylene is a renewable thermoplastic that was derived from sugar cane ethanol. The objectives of this study were to employ renewable high density polyethylene (HDPE) into composites using wheat straw and flax fibre to extend the range of properties of the HDPE while keeping the amount of renewable content to nearly 100%. The chemical resistance of these materials has not been reported before and it was investigated here by measuring and comparing the properties before and after accelerated chemical ageing. Both wheat straw and flax fibre had two different grades in size. Each of them was compounded with HDPE and additives (antioxidant and coupling agent) in a co-rotating twin screw extruder. The concentrations of fibres were varied from 0 to 30 wt-%. Then, injection molded samples were prepared for measurement of properties: tensile, flexural, impact tests. The effects of reinforcing fibre size were studied first. Both length and aspect ratio were considered. For both types of fibre composites, a general trend was observed. There was no clear evidence of improvements in flexural (strength and modulus) and tensile (strength, percentage elongation at break) properties with respect to the change in fibre size. However, impact (IZOD impact strength, Gardner impact failure energy) properties showed some improvements. This result was due to no substantial difference in size and aspect ratios in post-processed fibres that were actually residing in the matrix. There were remarkable improvements in flexural strength and modulus when the fibre content increased. However, minor decreases in tensile properties were observed. Furthermore, the impact properties were very sensitive to the concentration of fibres. As the fibre concentration went up, there were significant decreases in both IZOD impact strength and Gardner impact failure energy. Chemical resistance of these composites was studied by exposing them in six different chemical solutions (hydrochloric acid, acetic acid, sodium hydroxide, ethyl alcohol, industrial detergent, water) for up to thirty days. The increase in weight and leaching behaviour was observed. As the fibre content increased within the composites, the weight gain was more rapid during chemical ageing. Because there were more fibres exposed on the surface after chemical ageing, it is likely that they contributed to the higher flux of liquids (used for chemical ageing) inside the sample. Among the physical properties, tensile properties were most susceptible to the chemical ageing. One possible reason could be due to the exposed surface area to volume ratio, which was the highest in tensile bars and therefore faster mass transfer taking place into the matrix per volume. Finally, morphological study using scanned electron spectroscopy (SEM) revealed the damage on the surface when exposed to the chemicals. The fibres on the surface had been leached out in the sodium hydroxide solution leaving empty spaces. The fractured surface was also monitored via SEM. Though there was not enough evidence of strong interfacial interactions between the fibre and the polymer, good dispersions were observed.