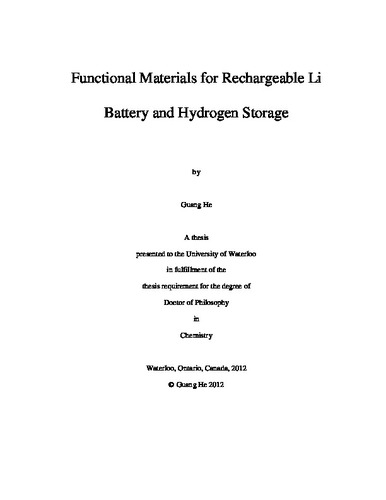 The exploration of functional materials to store renewable, clean, and efficient energies for electric vehicles (EVs) has become one of the most popular topics in both material chemistry and electrochemistry. Rechargeable lithium batteries and fuel cells are considered as the most promising candidates, but they are both facing some challenges before the practical applications. For example, the low discharge capacity and energy density of the current lithium ion battery cannot provide EVs expected drive range to compete with internal combustion engined vehicles. As for fuel cells, the rapid and safe storage of H2 gas is one of the main obstacles hindering its application. In this thesis, novel mesoporous/nano functional materials that served as cathodes for lithium sulfur battery and lithium ion battery were studied. Ternary lithium transition metal nitrides were also synthesized and examined as potential on-board hydrogen storage materials for EVs. Highly ordered mesoporous carbon (BMC-1) was prepared via the evaporation-induced self-assembly strategy, using soluble phenolic resin and Tetraethoxysilane (TEOS) as precursors and triblock copolymer (ethylene oxide)106(propylene oxide)70(ethylene oxide)106 (F127) as the template. This carbon features a unique bimodal structure (2.0 nm and 5.6 nm), coupled with high specific area (2300 m2/g) and large pore volume (2.0 cm3/g). The BMC-1/S nanocomposites derived from this carbon with different sulfur content exhibit high reversible discharge capacities. For example, the initial capacity of the cathode with 50 wt% of sulfur was 995 mAh/g and remains at 550 mAh/g after 100 cycles at a high current density of 1670 mA/g (1C). The good performance of the BMC-1C/S cathodes is attributed to the bimodal structure of the carbon, and the large number of small mesopores that interconnect the isolated cylindrical pores (large pores). This unique structure facilitates the transfer of polysulfide anions and lithium ions through the large pores. Therefore, high capacity was obtained even at very high current rates. Small mesopores created during the preparation served as containers and confined polysulfide species at the cathode. The cycling stability was further improved by incorporating a small amount of porous silica additive in the cathodes. The main disadvantage of the BMC-1 framework is that it is difficult to incorporate more than 60 wt% sulfur in the BMC-1/S cathodes due to the micron-sized particles of the carbon. Two approaches were employed to solve this problem. First, the pore volume of the BMC-1 was enlarged by using pore expanders. Second, the particle size of BMC-1 was reduced by using a hard template of silica. Both of these two methods had significant influence on improving the performance of the carbon/sulfur cathodes, especially the latter. The obtained spherical BMC-1 nanoparticles (S-BMC) with uniform particle size of 300 nm exhibited one of the highest inner pore volumes for mesoporous carbon nanoparticles of 2.32 cm3/g and also one of the highest surface areas of 2445 m2/g with a bimodal pore size distribution of large and small mesopores of 6 nm and 3.1 nm. As much as 70 wt% sulfur was incorporated into the S-BMC/S nanocomposites. The corresponding electrodes showed a high initial discharge capacity up to 1200 mAh/g and 730 mAh/g after 100 cycles at a high current rate 1C (1675 mA/g). The stability of the cells could be further improved by either removal of the sulfur on the external surface of spherical particles or functionalization of the C/S composites via a simple TEOS induced SiOx coating process. In addition, the F-BMC/S cathodes prepared with mesoporous carbon nanofibers displayed similar performance as the S-BMC/S. These results indicate the importance of particle size control of mesoporous carbons on electrochemical properties of the Li-S cells. By employing the order mesoporous C/SiO2 framework, Li2CoSiO4/C nanocomposites were synthesized via a facile hydrothermal method. The morphology and particle size of the composites could be tailored by simply adjusting the concentrations of the base LiOH. By increasing the ratio of LiOH:SiO2:CoCl2 in the precursors, the particle size decreased at first and then went up. When the molar ratio is equal to 8:1:1, uniform spheres with a mean diameter of 300-400 nm were obtained, among which hollow and core shell structures were observed. The primary reaction mechanism was discussed, where the higher concentration of OH- favored the formation of Li2SiO3 but hindered the subsequent conversion to Li2CoSiO4. According to the elemental maps and TGA of the Li2CoSiO4/C, approximately 2 wt% of nanoscale carbon was distributed on/in the Li2CoSiO4, due to the collapse of the highly ordered porous structure of MCS. These carbons played a significant role in improving the electrochemical performance of the electrode. Without any ball-mill or carbon wiring treatments, the Li2CoSiO4/C-8 exhibited an initial discharge capacity of 162 mAh/g, much higher than that of the sample synthesized with fume silica under similar conditions and a subsequent hand-mixing of Ketjen black. Finally, lithium transition metal nitrides Li7VN4 and Li7MnN4 were prepared by high temperature solid-state reactions. These two compounds were attempted as candidates for hydrogen storage both by density functional theory (DFT) calculations and experiments. The results show that Li7VN4 did not absorb hydrogen under our experimental conditions, and Li7MnN4 was observed to absorb 7 hydrogen atoms through the formation of LiH, Mn4N, and ammonia gas. While these results for Li7VN4 and Li7MnN4 differ in detail, they are in overall qualitative agreement with our theoretical work, which strongly suggests that both compounds are unlikely to form quaternary hydrides.