Determinants And Strategies For The Alternate Foot Placement 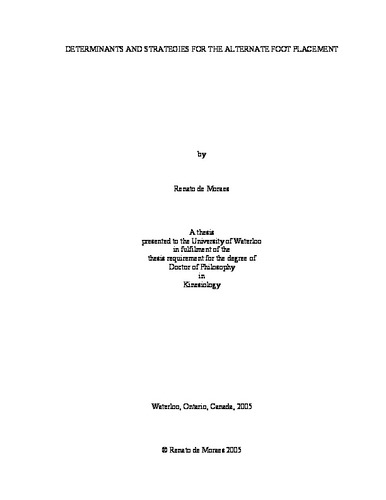 Undesirable landing area (e. g. , a hole, a fragment of glass, a water puddle, etc) creates the necessity for an alternate foot placement planning and execution. Previous study has proposed that three determinants are used by the central nervous system (CNS) for planning an alternate foot placement: minimum foot displacement, stability and maintenance of forward progression. However, validation of these determinants is lacking. Therefore, the general purpose of the series of studies presented here is to validate and test the generality of the decision algorithm of alternate foot placement selection developed previously. The first study was designed to validate the use of a virtual planar obstacle paradigm and the economy assumption behind minimum foot displacement determinant. Participants performed two blocks of trials. In one block, they were instructed to avoid stepping in a virtual planar obstacle projected in the screen of a LCD monitor embedded in the ground. In another block, they were instructed to avoid stepping in a real hole present in walkway. Behavioral response was unaffected by the presence of a real hole. In addition, it was suggested that minimum foot displacement results in minimum changes in EMG activity which validates the economy determinant. The second study was proposed to validate the stability determinant. Participants performed an avoidance task under two conditions: free and forced. In the free condition participants freely chose where to land in order to avoid stepping in a virtual obstacle. In the forced condition, a green arrow was projected over the obstacle indicating the direction of the alternate foot placement. The data from the free condition was used to determine the preferred alternate foot placement whereas the data from the forced condition was used to assess whole body stability. It was found that long and lateral foot placements are preferred because they result in a more stable behavior. The third study was designed to validate the alternate foot placement model in a more complex terrain. Participants were required to avoid stepping in two virtual planar obstacles placed in sequence. It was found that participants used the strategy of planning the avoidance movement globally and additional determinants were used. One of the additional determinants was implementation feasibility. In the third study, gaze behavior was also monitored and two behaviors emerged from this data. One sub-group of participants fixated on the area stepped during adaptive step, whereas another sub-group anchor their gaze in a spot ahead of the area-to-be avoided and used peripheral vision for controlling foot landing. In summary, this thesis validates the three determinants for the alternate foot placement planning model and extends the previous model to more complex terrains.