The contribution of the fronto-cerebellar system in cognitive processing 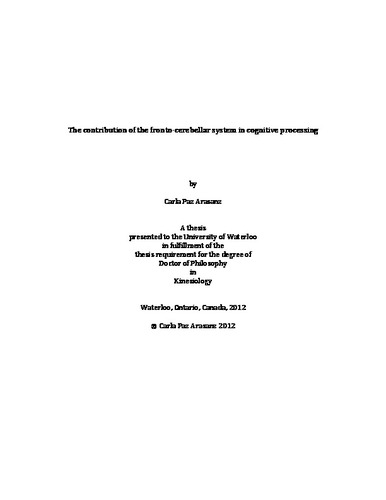 Over two decades of patient and neuroimaging data have provided increasing support for a role of the posterior cerebellum in cognition, particularly attention. Contralateral connections between the prefrontal cortex and the cerebellum are a probable basis for this effect. It is the purpose of this thesis to understand the contribution of the fronto-cerebellar system to cognitive and attentional processes. The first aim of this thesis was to localize areas of the cerebellum that participate in non-motor behaviour. After transient disruption of cerebellar activity using continuous theta burst stimulation (cTBS), a form of transcranial magnetic stimulation, Study 1 and 2 identified the right posterior-lateral cerebellum as a contributor to a network involved in two non-motor tasks; word generation and the attentional blink. The aim of Study 3 was to investigate if manipulating task demands increased fronto-cerebellar recruitment. The final study of this thesis employed electroencephalography (EEG) and cTBS to probe the neural events disrupted during the attentional blink task when the left frontal- right cerebellar system was transiently disrupted. Understanding the manner in which these neural events are affected by transient perturbation is integral to the understanding of the fronto-cerebellar contribution to cognitive and attentional processes. Together these studies help elucidate the role of the fronto-cerebellar system in non-motor functions.