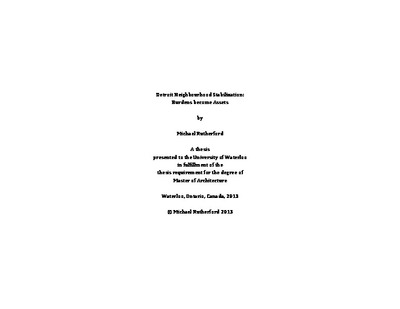 Detroit is just one example of a post-industrial city that has been struggling with the decline of the American industrial economy. In the past 100 years, Detroit city has gone from one of the largest and most promising cities in the world to a widely vacant, run down, and crippled metropolis. A shell of its former self, Detroit has become the poster child for all the problems that many North American cities experience, including: pollution, crime, urban sprawl, suburban flight and struggling education systems. Among others, these deterrents have driven Detroit residents from their homes and left the City largely abandoned. Since the mid 1950s the population has fallen from 1,900,000 to 713,000 in 2010. Enrolment in Detroit public schools has fallen from approximately 300,000 in 1966 to 52,000 in 2012. Today there are an estimated 40 square miles of vacant land and more still with abandoned buildings plaguing the landscape. This thesis asks the question of how best to utilize abandoned public schools as an asset for the neighbourhoods of Detroit. Once symbols of hope and prosperity these vacant schools located in the heart of many struggling neighbourhoods, now serve as a reminder of the disparity and blight that plagues Detroit. The adaptive reuse of abandoned schools as community driven educational centres, with a focus on urban agriculture, can lead the way towards self-sufficient neighbourhoods that allow residents to challenge the social and economic paradigm that is Detroit. The subject of this thesis concerns the transforming of burdens in a blighted city into the assets needed to improve the quality of life for distressed citizens. This thesis argues that this is possible by formulating an architectural response utilizing existing abandoned schools and vacant land to nurture a growing Urban Agriculture initiative that has the potential to play a role in the rebuilding of city neighbourhoods.