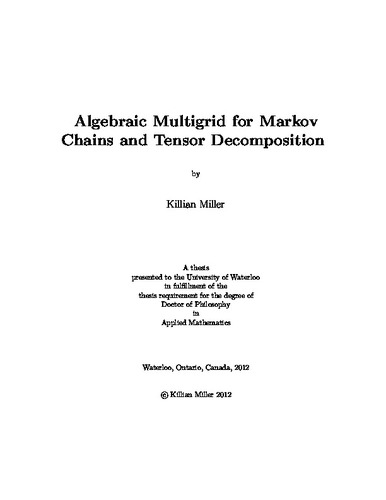 The majority of this thesis is concerned with the development of efficient and robust numerical methods based on adaptive algebraic multigrid to compute the stationary distribution of Markov chains. It is shown that classical algebraic multigrid techniques can be applied in an exact interpolation scheme framework to compute the stationary distribution of irreducible, homogeneous Markov chains. A quantitative analysis shows that algebraically smooth multiplicative error is locally constant along strong connections in a scaled system operator, which suggests that classical algebraic multigrid coarsening and interpolation can be applied to the class of nonsymmetric irreducible singular M-matrices with zero column sums. Acceleration schemes based on fine-level iterant recombination, and over-correction of the coarse-grid correction are developed to improve the rate of convergence and scalability of simple adaptive aggregation multigrid methods for Markov chains. Numerical tests over a wide range of challenging nonsymmetric test problems demonstrate the effectiveness of the proposed multilevel method and the acceleration schemes. This thesis also investigates the application of adaptive algebraic multigrid techniques for computing the canonical decomposition of higher-order tensors. The canonical decomposition is formulated as a least squares optimization problem, for which local minimizers are computed by solving the first-order optimality equations. The proposed multilevel method consists of two phases: an adaptive setup phase that uses a multiplicative correction scheme in conjunction with bootstrap algebraic multigrid interpolation to build the necessary operators on each level, and a solve phase that uses additive correction cycles based on the full approximation scheme to efficiently obtain an accurate solution. The alternating least squares method, which is a standard one-level iterative method for computing the canonical decomposition, is used as the relaxation scheme. Numerical tests show that for certain test problems arising from the discretization of high-dimensional partial differential equations on regular lattices the proposed multilevel method significantly outperforms the standard alternating least squares method when a high level of accuracy is required.