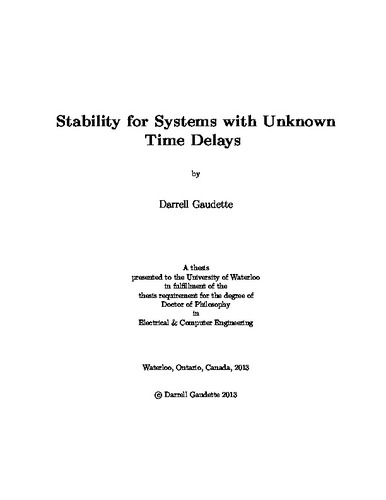 Time delays are of long-standing interest in the study of control systems since they appear in many practical control problems and tend to degrade overall system performance. In this thesis, we consider two distinct problems involving uncertain time delays. The first problem that we consider is the achievable delay margin problem, which is determining the longest delay for which stability can be maintained when using a linear time invariant (LTI) controller. This problem has been considered in continuous-time, where bounds (often tight) have been found for plants with non-zero right half plane poles. In this work, we consider the discrete-time case, where we prove that an LTI controller exists which stabilizes the plant and the plant with a one step delay if and only if the plant has no negative, real unstable poles. The second problem that we consider is stabilizing any continuous-time single-input single-output LTI plant with an arbitrarily large time delay and gain. To solve this problem, we propose a simple generalized hold whose resulting discretized system is amenable to adaptive control. Furthermore, by exploiting the structure of the resulting discretized system, we propose purpose built estimators for the unknown gain and delay, which allows us to not only provide bounded-input bounded-output (BIBO) closed-loop stability, but also guarantees the exponential decay of any plant initial conditions, robustness to un-modelled dynamics, and tolerance to occasional, possibly persistent, jumps in the gain and delay. Furthermore, for the case of a first order plant, a similar, but suitably modified controller is shown to tolerate continuous variation of the unknown delay while still providing BIBO closed-loop stability.