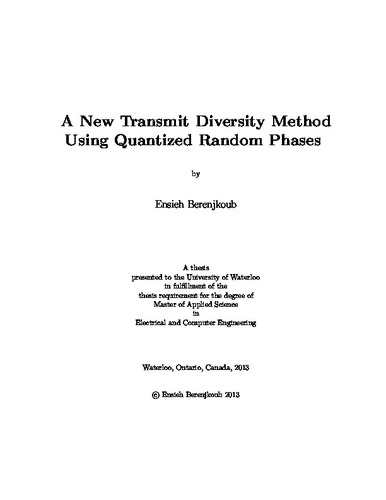 Wireless communication systems, aside from path-loss, also suffer from small scale up-and- down variations in the power of the received signal. These fluctuations in the received signal power, commonly referred to as multi-path fading, result in a significant perfor- mance degradation of the system. One way to combat fading is diversity. The idea behind diversity is to provide the receiver with multiple independent copies of the transmitted signal, either in time, frequency or space dimension. In broadcast networks with underlying slow-faded channels, an appropriate option for exploiting diversity is transmit diversity, which deploys several antennas in the transmitter terminal. Based on the amount of available channel state information on the transmitter side, various transmit diversity schemes have been proposed in the literature. Because of certain limitations of broadcast networks, a practical assumption in these networks is to provide no channel state information for the transmitter. In this dissertation, a new scheme is proposed to exploit transmit diversity for broad- cast networks, assuming no channel state information in the transmitter. The main idea of our proposed method is to virtually impose time variations to the underlying slow-faded channels by multiplying quantized pseudo-random phases to data symbols before trans- mission. Using this method, all necessary signal processing can be transferred to the RF front-end of the transmitter, and therefore, the implementation cost is much less than that of alternative approaches. Under the proposed method, the outage probability of the system is analyzed and the corresponding achievable diversity order is calculated. Simulation results show that the performance of our proposed scheme falls slightly below that of the optimum (Alamouti type) approach in the low outage probability region.