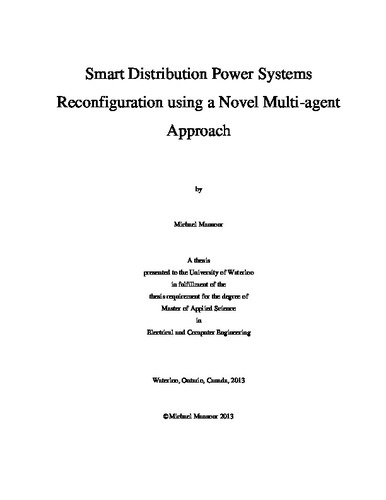 The few past years have witnessed a huge leap in the field of the smart grid communication networks in which many theories are being developed, and many applications are being evolved to accommodate the implementation of the smart grid concepts. Distribution power systems are considered to be one of the first leading fields having the strong desire of applying the smart grid concepts; resulting in the emersion of the smart distribution power systems, which are the future visualization of the distribution systems having both the ability of smart acting, and the capabilities of automation, self-healing, and decentralized control. For the sake of the real implementation of the smart distribution power systems, the main functions performed by the traditional systems have to be performed by the new smart systems as well, taking into account the new features and properties of those smart systems. One of those main functions is the ability of power networks optimal reconfiguration to minimize the system’s power loss while preserving the system radial topology. The proposed reconfiguration methodology targets the utilization of a hybrid genetic algorithm with two fuzzy controllers that could converge to the global optimal network configuration with the fastest convergence rate consuming the least computational time. The first fuzzy controller is designed to reject any infeasible system configurations that might show up in the population of the genetic algorithm and violate the system radial topology, while the second fuzzy controller is designed to adapt the mutation rate of the genetic algorithm. Consequently, a novel multi-agent system is proposed and designed to perform the reconfiguration application in smart distribution power systems employing the concepts of distributed processing and decentralized control demanded by those systems. A multi-agent system employs a group of intelligent agents that have the capabilities of autonomy, reactivity, pro-activity, and sociality. Those agents cooperate with each other in order to perform a certain function through their powerful abilities to communicate, socialize, and make a common decision in a decentralized fashion based on the information retrieved from the surrounding environment and compiles with their ultimate objective.