Living on the Edge: Old Colony Mennonites and digital technology 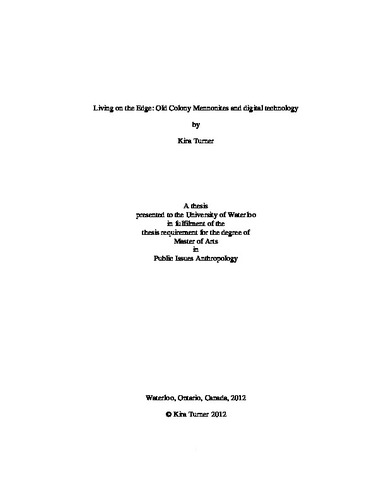 Technology does not stand alone in any society. Each society negotiates its own relationship with technology and places its own value on it. Each chooses its own path. This thesis considers the path taken towards technology in the 21st Century by Old Colony Mennonites in Southwestern Ontario. Drawing on Coleman, relationships created by digital technologies are difficult to study as they extend or embed themselves into everyday life. While research into traditional Mennonite usage of static technologies exists, new forms of digital technologies – Smartphones, Texting, and Web 2.0 in particular – have not received the same attention. Initially, I asked whether a divide based on a volitional rejection of digital technology exists within the Old Colony. Ancillary questions surround issues of separation from mainstream society and economic disadvantages due to limited technology usage. Research consisted of interviews and observation. Four themes were identified that underpin this thesis; migration, economic, education and technology. Challenging stereotypes surrounding technology usage, evidence suggests it is not a digital divide Old Colony Mennonites negotiate but a continuum. Digital technology usage expands and contracts the walls surrounding isolation and separation from mainstream society. It allows ideas to flow between groups and for the shrinking of space locally and globally. It may lead some to move away from the church but it also may strengthen their ties. Increased literacy skills are identified as a stepping-stone, not towards the mainstream world but toward the desired better life, they left Mexico to pursue.