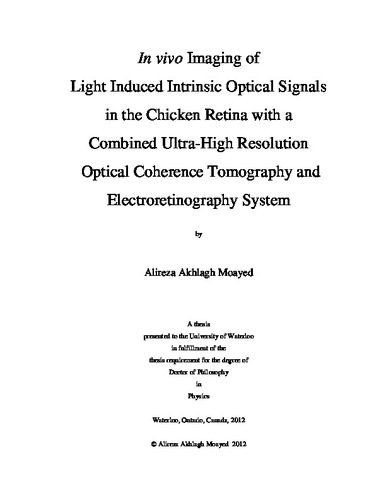 The main objective of this thesis is to investigate the intrinsic optical signals (IOSs) with an ultra-high resolution optical coherence tomography system (UHROCT). In order to study the retinal IOSs evoked by visible light, an UHROCT and an Electroretinogram (ERG) system was combined. An animal model (chicken retina) based on its retinal avascularity and cone dominance, was selected. Imaging the chicken retina with OCT resulted in high contrast, high resolution (~3μm axial and ~5 μm lateral resolution) 2D and 3D volumetric tomograms, in which all retina layers were clearly distinguishable. Using the combined UHROCT and ERG system to image IOSs from the chicken retina exposed to visible light (7ms green flash) resulted in highly reproducible IOS recordings from all retinal layers for the first time. All inner retinal layers showed an initial increase and subsequently a decrease in the intensity of the backreflected imaging light within the first 100 ms after the onset of the stimulus. Outer segments of the photoreceptors also showed a decrease in the backreflected imaging light within 100 ms after the onset of the flash. All retinal layers showed a strong decrease in the backreflected light within 150 to 175 ms after the onset of the flash. Imaging the pupil dynamics of the chicken with a modified combined UHROCT and ERG system showed that part of the strong negative IOSs observed in all retinal layers resulted from the vignetting of the imaging beam due to the light induced pupil constriction. Thorough analysis of the pupil dynamics acquired with UHROCT showed a time dependent effect of the anesthesia agent on pupil constriction. Further experiments to investigate an anesthesia effects on retinal function showed significant changes in ERG components. Statistical analysis showed that Isoflurane anesthesia severely affects the inner retinal response. In conclusion, it was hypothesized that the fast IOSs within ~50-100 ms after the onset of the visual stimulus originated from the neuronal tissue in the retina and are related to tissue optical property changes as a result of the electrical signal propagation in the light activated retina. Longer term decreases in backreflected light are likely due to pupil changes.