Numerical studies of transport and spin-orbit exchange in InAs nanowires 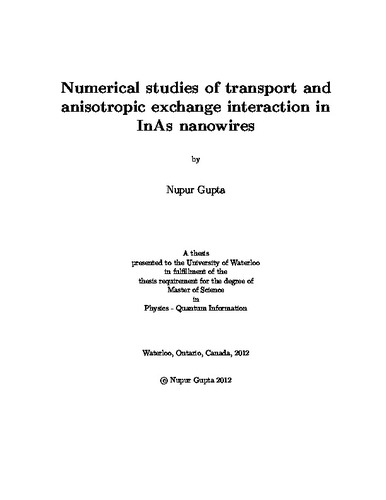 High spin-orbit coupling and low effective mass of electrons in InAs nanowires makes it an attractive material for studying quantum physics in mesoscopic and nanoscale quantum devices. We first study the transport properties of FET devices made of InAs nanowires of diameter in the range of 35-70 nm. The temperature dependence of electron mobility in InAs nanowires from 10-200 K exhibits a positive slope below approximately 0 K, then turns over to a negative slope at higher temperatures. This is explained by Coulomb scattering from the surface donor like states that give rise to a subsurface accumulation layer and the thermal activation of these surface donors. The scattering rates are calculated using a momentum relaxation time approximation. The transition probabilities between the self-consistent Poisson-Schrodinger states of a 50 nm diameter nanowire are calculated using Fermi's golden rule. The results clarify the dominant scattering mechanism in InAs nanowires and signify the need for surface passivation to obtain high mobility devices. In a second study, we model a gate defined double quantum dot in the nanowire with high spin-orbit coupling in order to determine the precise gate voltage dependence of the exchange Hamiltonian. This modelling is critical for designing two-qubit quantum logic operations in the nanowire double dot architecture. A quantum double well structure is simulated based on the realistic potential created by a set of fine local electrostatic gates in the presence of nanowire surface accumulation layer. An effective spin Hamiltonian is derived for a pair of interacting electrons localized in the double dot system in the presence of a strong spin-orbit coupling. The accuracy of the effective Hamiltonian is established by a strong agreement obtained between the dynamics generated by the effective Hamiltonian with those obtained by a numerically exact solution of the time-dependent Schrodinger equation. The parametric dependences of the effective exchange Hamiltonian on external magnetic field, barrier gate voltage, and spin-orbit field is determined. This opens the door to designing optimal pulses for high fidelity quantum gates in real InAs nanowire devices.