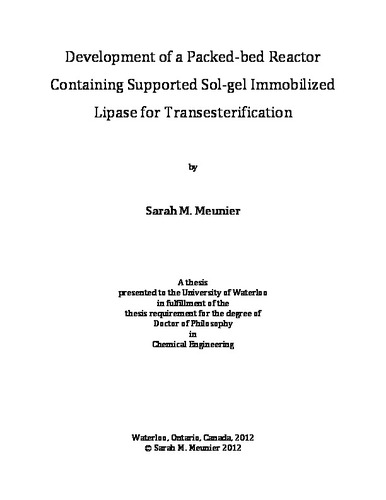 The objective of this work was to develop a novel enzyme immobilization scheme for supported lipase sol-gels and to evaluate the potential of the immobilized biocatalyst for the production of biodiesel in a packed bed reactor. Two sources of lipase (EC 3.1.1.3 triacylglycerol hydrolase) were used in this study and the transesterification of methanol and triolein to produce glycerol and methyl oleate was used as a model reaction of biodiesel production. A commercially available form of immobilized lipase, Novozym® 435, was used as a basis for comparison to the literature. Upon establishing a lipase sol-gel formulation technique, the experimental methodology for the transesterification reaction using Novozyme® 435 was developed. Subsequently, a series of inert materials were considered based on their suitability as supports for immobilized lipase sol-gels and the synthesis of methyl oleate. The value of a supported lipase sol-gel is to improve the activity and stability of the enzyme and develop an immobilized biocatalyst that is practical for use under packed bed reactor conditions. Of the six support materials considered (6-12 mesh silica gel, Celite® R633, Celite® R632, Celite® R647, anion exchange resin, and Quartzel® felt), the diatomaceous earth supports (Celite® R633, R632 and R647) exhibited high enzymatic activity, were thermally stable, and possessed high sol-gel adhesion. From the three types of diatomaceous earth considered, Celite® R632 supported lipase sol-gels were identified as the most promising supported lipase sol-gels for methyl oleate production via transesterification. Upon further evaluation, the Celite® R632 lipase sol-gels were found to achieve high methyl oleate percent conversions, glycerol-water absorption was only significant at glycerol levels higher than 75%, and the immobilized lipase had high stability upon storage at 4°C for 1.5 years. To determine the effects of methanol and glycerol inhibition as well as temperature on the reaction kinetics, a ping-pong bi-bi kinetic model was developed and validated over a range of methanol concentrations and temperatures. The optimal methanol concentration for the conditions tested was in the range of 1.3 M to 2.0 M, and increased with increasing temperature. The model developed was consistent with the experimental data and confirmed that glycerol inhibition and the presence of products had significant effects on the reaction kinetics. The methyl oleate production capabilities of the Celite® supported lipase sol-gel were investigated using a packed bed reactor and compared with Novozym® 435 under similar operating conditions. A kinetic and mass transfer based model was developed for the reactor system using a novel efficiency correlation to account for the effect of glycerol on the enzymatic activity. Increasing the flow rate (1.4 mL/min to 20 mL/min) increased the reaction rate, presumably due to the reduction of the glycerol inhibition effect on the immobilized biocatalyst. The Celite® supported lipase sol-gel was found to have superior performance over Novozym® 435 both under batch stirred tank reaction conditions and in a packed bed reactor (83% conversion for Celite® sol-gel vs. 59% conversion for Novozym® 435 at 20 mL/min in the packed bed reactor). Based on the results obtained, Celite® supported lipase sol-gels exhibited good performance for the transesterification of triolein with methanol to produce methyl oleate in both batch and packed bed reactors, and warrant further exploration for the enzymatic production of biodiesel.