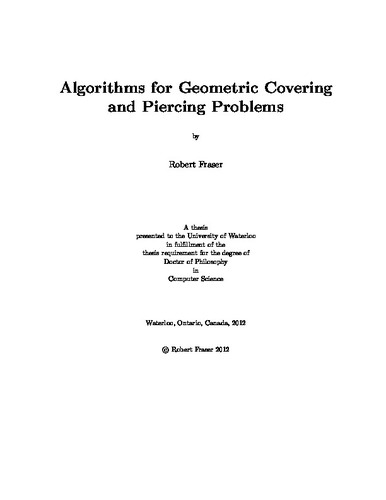 This thesis involves the study of a range of geometric covering and piercing problems, where the unifying thread is approximation using disks. While some of the problems addressed in this work are solved exactly with polynomial time algorithms, many problems are shown to be at least NP-hard. For the latter, approximation algorithms are the best that we can do in polynomial time assuming that P is not equal to NP. One of the best known problems involving unit disks is the Discrete Unit Disk Cover (DUDC) problem, in which the input consists of a set of points P and a set of unit disks in the plane D, and the objective is to compute a subset of the disks of minimum cardinality which covers all of the points. Another perspective on the problem is to consider the centre points (denoted Q) of the disks D as an approximating set of points for P. An optimal solution to DUDC provides a minimal cardinality subset Q*, a subset of Q, so that each point in P is within unit distance of a point in Q*. In order to approximate the general DUDC problem, we also examine several restricted variants. In the Line-Separable Discrete Unit Disk Cover (LSDUDC) problem, P and Q are separated by a line in the plane. We write that l^- is the half-plane defined by l containing P, and l^+ is the half-plane containing Q. LSDUDC may be solved exactly in O(m^2n) time using a greedy algorithm. We augment this result by describing a 2-approximate solution for the Assisted LSDUDC problem, where the union of all disks centred in l^+ covers all points in P, but we consider using disks centred in l^- as well to try to improve the solution. Next, we describe the Within-Strip Discrete Unit Disk Cover (WSDUDC) problem, where P and Q are confined to a strip of the plane of height h. We show that this problem is NP-complete, and we provide a range of approximation algorithms for the problem with trade-offs between the approximation factor and running time. We outline approximation algorithms for the general DUDC problem which make use of the algorithms for LSDUDC and WSDUDC. These results provide the fastest known approximation algorithms for DUDC. As with the WSDUDC results, we present a set of algorithms in which better approximation factors may be had at the expense of greater running time, ranging from a 15-approximate algorithm which runs in O(mn + m log m + n log n) time to a 18-approximate algorithm which runs in O(m^6n+n log n) time. The next problems that we study are Hausdorff Core problems. These problems accept an input polygon P, and we seek a convex polygon Q which is fully contained in P and minimizes the Hausdorff distance between P and Q. Interestingly, we show that this problem may be reduced to that of computing the minimum radius of disk, call it k_opt, so that a convex polygon Q contained in P intersects all disks of radius k_opt centred on the vertices of P. We begin by describing a polynomial time algorithm for the simple case where P has only a single reflex vertex. On general polygons, we provide a parameterized algorithm which performs a parametric search on the possible values of k_opt. The solution to the decision version of the problem, i.e. determining whether there exists a Hausdorff Core for P given k_opt, requires some novel insights. We also describe an FPTAS for the decision version of the Hausdorff Core problem. Finally, we study Generalized Minimum Spanning Tree (GMST) problems, where the input consists of imprecise vertices, and the objective is to select a single point from each imprecise vertex in order to optimize the weight of the MST over the points. In keeping with one of the themes of the thesis, we begin by using disks as the imprecise vertices. We show that the minimization and maximization versions of this problem are NP-hard, and we describe some parameterized and approximation algorithms. Finally, we look at the case where the imprecise vertices consist of just two vertices each, and we show that the minimization version of the problem (which we call 2-GMST) remains NP-hard, even in the plane. We also provide an algorithm to solve the 2-GMST problem exactly if the combinatorial structure of the optimal solution is known. We identify a number of open problems in this thesis that are worthy of further study. Among them: Is the Assisted LSDUDC problem NP-complete? Can the WSDUDC results be used to obtain an improved PTAS for DUDC? Are there classes of polygons for which the determination of the Hausdorff Core is easy? Is there a PTAS for the maximum weight GMST problem on (unit) disks? Is there a combinatorial approximation algorithm for the 2-GMST problem (particularly with an approximation factor under 4)?