The Canadian Culinary Tourists: How Well Do We Know Them? 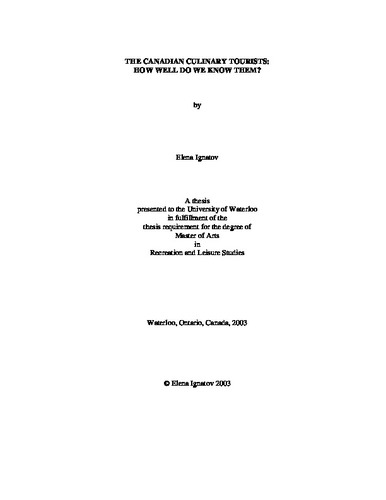 Culinary tourism is emerging as an important component of the rapidly growing cultural tourism market. It introduces tourists to new flavours and different traditions associated with the preparation, serving, and consuming of foods and beverages. Although food has been strongly linked to tourism in some European and Asian destinations for years, culinary tourism is a relatively new phenomenon in North America. Current research tends to focus on only one aspect of culinary tourism, wine, with most research done in Australia and New Zealand. Although growing, there is still little research in Canada, and it has also concentrated on the wine component of culinary tourism. However, those who engage in wine tourism may not necessarily be the same people who would engage in other culinary practices such as visiting farmer?s fairs and markets, browsing food stores featuring local and gourmet ingredients, or who seek out authentic cuisine in restaurants. This study examines the characteristics and composition of the Canadian culinary tourism market and also explores the relationship between food and wine tourism. The study is based on the Travel Activities and Motivations Survey (TAMS) dataset. The survey was carried out between September 1999 and April 2000 and involved a telephone interview followed by a mail questionnaire. The total number of completed mail questionnaires received was 5,740, generating a response rate of 23. 2%. The objectives of the study were to understand the similarities and differences between 1) Canadian culinary travellers and the rest of the Canadian traveling population; 2) culinary tourists engaging in food-related activities, those who participate in wine, and those who participate in both; and 3) to identify segments of culinary tourists with respect to cross-participation in each of the culinary related activities. The segments were compared in terms of demographics, psychographics, vacation and getaway trip characteristics, and media consumption habits. To accomplish the first two objectives, culinary-related activities were arranged in three groups: <br> <b>Group One</b>: farmer?s fairs/markets; shop/browse gourmet foods in retail stores or farms; pick-your-own farms/harvesting; <Br> <b>Group Two</b>: restaurant dining featuring regional or local cooking; restaurant dining at internationally acclaimed restaurants; staying at a cooking school; staying at a gourmet restaurant with accommodation on premises; <br> <b>Group Three</b>: touring a region?s wineries where one stays one or more nights; going to wineries for day visits and tasting; staying at a wine tasting school. ?Culinary travellers? were conceptually defined as those who had taken trips in Canada in the past two years preceding the survey, and had participated in at least one activity from both group one <u>and</u> two <u>or</u> had participated in at least one activity from group three. ?Food travellers? were defined as those who had traveled in Canada in the past two years preceding the survey and had participated in at least one activity from Group One <u>and</u> Two and had not engaged in any activities in Group Three; ?wine travellers? were those who had participated in at least one activity in Group Three and did not qualify as ?food travellers?; and ?food and wine travellers? were those who met the criteria of both ?food? and ?wine? travellers. A factor analysis was performed in order to establish which cuisine-related variables were closely related and what underlying dimensions might exist in culinary tourism activities. The next step was to perform a k-means cluster analysis of the factors in order to identify distinct groups of cuisine travellers. The resulting four clusters were labeled: ?rural?, ?sophisticated?, ?indifferent?, and ?true cuisine?. The results show that the Canadian culinary tourism market represents nearly 45% of Canadian travellers and exhibits characteristics and behaviours that clearly distinguish them from other tourists. Canadian culinary tourists tend to be females in their mid-forties, highly educated with above average incomes; they are highly diverse in their travel motivations, interests, and activities pursuits (both at home and while traveling); travel mainly in the summer months but also take trips in the other seasons; they are accompanied by a spouse/partner (no children) while traveling and stay at hotels/resorts/country inns or at the homes of friends and relatives. They exhibit high readership preferences for newspapers (daily and weekend) and travel publications, and are more likely to use the Internet as an information source. In all instances, the culinary segment represented the large majority compared to the non-culinary travellers. Two segments emerged as relatively consistent across the analyses involving the ?food?, ?wine?, ?food and wine?, and the ?rural?, ?sophisticated?, ?indifferent?, and ?true cuisine? segments. These segments were the ?food/rural? and the ?food and wine/true cuisine? groups. The ?food/rural? group are highly interested in the local, traditional country-style forms of cuisine associated with rural regions; they seem to enjoy being in rural areas and close to the sources of their daily food. They tend to be females, in their mid-forties, with secondary education and middle incomes; travel to strengthen family ties, and seek simpler holiday experiences associated with rural regions. In contrast, the ?food and wine/true cuisine? group is very diverse in their travel motivations and activities pursuits; they are highly involved in all aspects of culinary tourism and exhibit high cultural orientation and exquisite tastes; these are females, in their mid-forties, university graduates with incomes well above average. Another interesting finding is that wine tourists appear mostly interested in the wine itself; they are not really as active and diverse in their activities and interests as the food and food and wine enthusiasts. This may indicate that food and not wine is what motivates culinary tourists; rather, wine is only a supplement. The findings of the study led to a consideration of possible marketing implications and areas for future research have been provided.