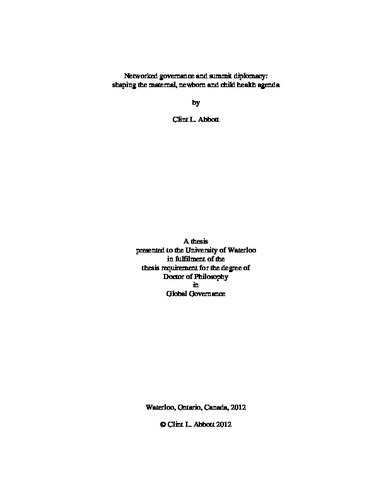 Diplomatic summits serve as critical opportunities for national leaders to interact and mobilize the political will needed to address the world’s greatest challenges. Yet, summits have a checkered past with both successes and failures. Consequently, summit diplomacy has been equated with highly publicized photo opportunities for heads of government and grandiose communiqués with vague commitments that are never fully realized. Due to concerns about their effectiveness, legitimacy, and representation, summits are in a period of transition. These trends and challenges are especially evident in the G8, and scholars have recognized that the G8 summit has evolved to include more actors than the past. Although acknowledged as a potential site of networked governance, empirical evidence of such activity is limited. Research has yet to identify the actors involved, the structures of the relationships, and the impact of networked approaches on the preparatory process. This research specifically explores the question of how a global level network affects the priorities adopted by the G8. Using the 2010 G8 Summit as a case to examine the increased prevalence of networked activity, this study focuses on the Summit’s signature initiative: maternal, newborn and child health (MNCH). MNCH is a longstanding global problem and despite efforts such as the Millennium Development Goals, poor health outcomes persist in regions throughout the world. But to understand the selection and shaping of MNCH as the signature initiative of the 2010 G8 Summit, a mixed method approach is used. Social network analysis provides a detailed description of the actors involved in networked governance in summit diplomacy for the G8, and the structure of their relationships with one another. Qualitative data analysis of 63 in depth interviews of network members illuminates the rich and varied perspectives of the participants, which yields insight about why and how actors engage each other in order to achieve individual and collective goals. The study demonstrated that networked governance contributed to the political prioritization and substantive policy content of summit agenda items, determined during the 2010 G8 Summit preparatory process. In the case of MNCH, while the network was found to include of a diverse range of state and non-state actors, a core group of bureaucratic, political, and NGO actors played a prominent role in the selection and shaping of the MNCH initiative. Yet, the role, values and contributions of actors within the network were contested by network members during the preparatory process, demonstrating that shared goals and norms were not a dominant feature of the network. Moreover, the networked governance process has not entirely escaped the confines of geographical boundaries, given the most central actors in the network met face-to-face on a regular basis and were located in close geographical proximity. Actors from regions where MNCH problems persist most severely remained marginalized in the networked approach. While financial capital is an essential ingredient for the MNCH programs and interventions proposed for the G8 initiative, social capital was a neglected factor that is critical for building the capacity to generate new ideas and solutions. Actors within the 2010 G8 preparatory network for MNCH adopted various strategies to build and mobilize social capital. Specifically, a group of Canadian-based NGOs and an international organization formed a coalition in order to strategically advance the MNCH issue on the summit agenda. Conversely, government actors did not invest in developing and mobilizing social capital. Ultimately, informal strategies proved more valuable for breaking down hierarchical barriers and exerting influence than formal processes designed by government. Networked governance was a key factor that contributed to the political prioritization and shaping of the MNCH signature initiative for the 2010 G8 Summit and increased the inclusiveness of the summit’s preparatory process. However, while important, networked governance was not sufficient to fully explain the final outcomes – other factors such as domestic and global political contexts and the characteristics of the MNCH issue influenced the process and outcomes. Moreover, G8 summit diplomacy moved beyond being solely a state-based process in the case of MNCH, but the presence of a network of interconnected actors did not equate to better problem-solving. Although scholars and practitioners agree that integrated horizontal and vertical approaches are required for addressing the complexity of MNCH challenges, the networked approach failed to enable a move beyond conventional solutions to address the systemic nature of MNCH challenges. The findings of the study have important implications for policy and governance processes, where widespread cooperation among a network of state and non-state actors will be required for resolving intractable global problems.