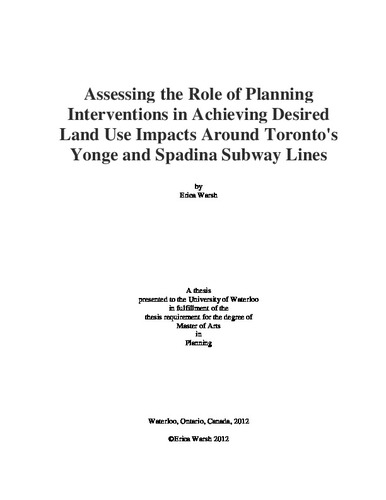 The effect transit investments can have on surrounding land uses has been studied in planning literature. Often it is argued that high-density, more sustainable development occurs around stations on newly constructed transit lines. This study examines the impacts of the Yonge-University-Spadina line on development in the north ends of the city of Toronto. This study is guided by three objectives. First, the research aims to determine the extent of the differences in built form and densities between the two study sites. Second, the thesis explains why these differences have emerged and what factors have shaped the evolution of the two sites. Based on the first two analyses, the research provides recommendations to encourage intensified, transit-oriented development in areas that currently do not reflect these principles. A variety of methods are used to achieve these objectives including: an analysis of empirical census data, a comparison of land uses and built form through archive and current photographs, a property value comparison, a transit ridership analysis, a review of archive newspaper articles, an examination of previous and existing policy documents, and a review of previously conducted interviews with Toronto area developers and municipal officials. This study concludes that the Yonge line has experienced significantly more growth over time than the Spadina line. It finds that the policy provisions that dictate development along the Yonge line are much more conducive to intensified growth. As a result, recommendations are made that the city establishes a similar policy framework for land around the Spadina line so that obstacles to potential for intensified growth may be eliminated. More specifically, the thesis identifies contemporary monetary and policy incentives to developers to encourage sustainable development.