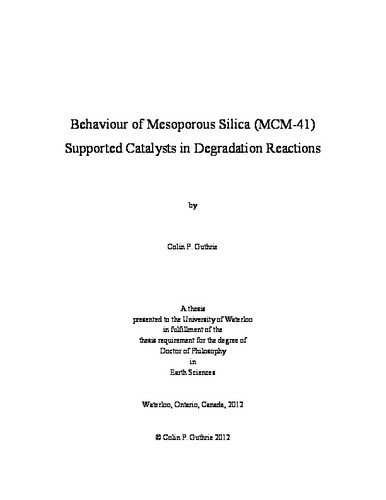 A research project was carried out to investigate several aspects of Mobil’s composition of matter #41 (MCM-41) pertaining to its potential application in water treatment technologies. The goal of the work was to lead to a recommendation of whether further work investigating this particular, potential application is warranted at the present time. A dissolution experiment indicated that Pd/MCM-41 is more stable in contact with deionized water at 25±0.1 degrees Celsius than purely siliceous MCM-41. Stability increases with increasing mass percent loading of Pd in the Pd/MCM-41 material. The increased stability was attributed to a reduction in Pd/MCM-41 surface areas relative to the parent MCM-41 material. The reduction in surface area is likely the result of partial or complete blocking of the MCM-41 mesopores by Pd centres. Ni/MCM-41 was less stable in contact with deionized water than MCM-41 and Pd/MCM-41. Both Ni and Pd impregnated MCM-41 exhibited enhanced stability relative to purely siliceous MCM-41 in 0.01 M NaCl solution. The stability enhancement was more pronounced for Pd/MCM-41. A long term dissolution experiment showed that MCM-41 retained its characteristic hexagonal mesopore structure and high surface area after 1,174 days of contact with deionized water. The ability of Pd/MCM-41 to absorb hydrogen was investigated in a series of experiments in pressure cells at 25±0.1 degrees Celsius and approximately 101.3 kPa. The Pd in Pd/MCM-41 was able to absorb 0.85±0.18 moles of hydrogen per mole of Pd present. This was a higher level of absorption than found in most other, published Pd-hydrogen investigations. It is proposed that enhanced uptake of hydrogen by Pd/MCM-41 may be the result of a higher proportion of surface and subsurface sites in the samples relative to other supported Pd materials. Batch and column trichloroethylene (TCE) degradation experiments indicated that Pd/MCM-41 has substantial longevity while degrading at least 91% of inflow TCE concentrations in hydrogen-saturated deionized water over 5,036 pore volumes. The average inflow TCE concentration was 4.94E-2 ± 4.87E-3 mmol/l with maximum and minimum concentrations of 7.24E-2 mmol/l and 2.63E-2 mmol/l, respectively. The dominant breakdown product of TCE degradation in the presence of Pd/MCM-41 was ethane. Minimal concentrations of intermediate degradation products were detected, if at all. This result suggests that TCE completely degrades to ethane before desorbing from the Pd/MCM-41 surface. It was shown that Pd/MCM-41 was more effective and had better longevity at treating inflow TCE compared to a lower cost substitute, Pd/sand. Unlike Pd/MCM-41, Ni/MCM-41 did not induce degradation of TCE. Column experiments using Ni-Pd/MCM-41 materials indicated that while the material does induce degradation of TCE, the Pd cannot be substituted for Ni on a 1:1 basis while still obtaining similar degradation results as Pd/MCM-41. Pd/MCM-41 was not able to substantially reduce initial concentrations of hexamethylphosphoramide (HMPA) in a batch experiment. A small reduction in the initial HMPA concentration was attributed to adsorption onto the Pd/MCM-41 surfaces rather than degradation of the compound. Several of the above-mentioned results suggest that MCM-41 and Pd/MCM-41 show great potential for being incorporated into water treatment technologies. Both the long term stability of the material in contact with deionized water and the longevity of a Pd/MCM-41 column in treating inflow TCE are very promising results with respect to applications in water treatment technologies. It is recommended that future work be pursued with this goal in mind.