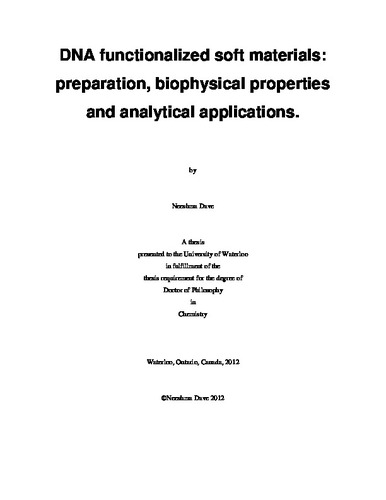 Bio-nanotechnology is the use of biomolecules to control both the structure and property of nanomaterials. No biomolecule has been employed more often than DNA as exemplified in the numerous demonstrations of DNA-directed assembly of nanomaterials. DNA has been used to covalently functionalize and assemble soft nanoparticles (e.g. liposomes) and hard nanoparticles (e.g. gold and silica nanoparticles) into a variety of hierarchical nanostructures. The majority of previous work however has focused on the latter, i.e., the assembly of “hard” nanoparticles such as gold nanoparticles (AuNPs) as oppose to the assembly of soft materials. The primary focus of this thesis is to add to the growing field of DNA-directed assembly of soft materials owing to the promise of such materials in a variety of analytical and biomedical applications. The first class of soft materials considered are liposomes which interestingly can be deformed by relatively weak intermolecular forces. In addition, DNA anchored to its surface can readily diffuse laterally within the lipid bilayer while DNA attached to inorganic nanoparticles remain fixed in position. We systematically consider the effect of varying the liposome structure, size, charge, and fluidity on liposome assemblies, in chapter 2. In addition, the interesting properties of liposomes are highlighted by a side-by-side comparison to DNA-functionalized gold nanoparticles, offering fundamental insights into DNA-directed assembly. Furthermore, hybrid DNA-directed assemblies composed of both AuNPs and liposomes are described in Chapter 3. In particular, the photothermal effects of such DNA-coupled liposome and AuNP assemblies were modulated by controlling the distance between liposome and AuNP allowing such systems to have potential application in drug-delivery. In chapter 4, the utility of liposomes is demonstrated as we exploit the fluidity of its diffuse bilayer with split aptamer functionalization for the rapid and selective detection of metabolites. The second class of soft material of interest in this thesis are hydrogels, which are cross-linked hydrophilic polymers. Because hydrogels are swollen in water, they can be used to immobilize biomolecules such as DNA for a myriad of applications. In chapter 5, the preparation and characterization of DNA-functionalized polyacrylamide hydrogels are presented. The use of such a DNA-modified hydrogel for the simultaneous detection and removal of mercury from water is subsequently demonstrated.