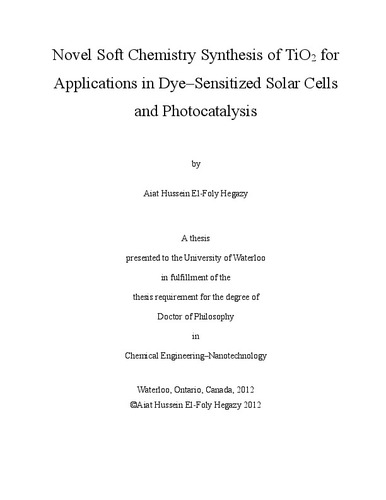 Although the high cost of solar cells prevents them being a primary candidate for energy production, great attention has been paid towards them because of the depletion of the conventional energy sources–fossil fuels–and the global warming effect, and the need to provide power to remote communities disconnected from the power grid. To reduce the cost, thin film technologies for silicon solar cells have also been investigated and commercialized, but dye sensitized solar cells (DSSC) have been considered as a promising alternative even for the silicon thin films with efficiency exceeding 10%. Compared with silicon-based photovoltaic devices, DSSCs are quite complex systems that require an intimate interaction among components. Within the last few years, conclusive smart solutions have been provided to improve the efficiency of these cells, with solar efficiency that makes them potential competitors against silicon devices. The most successful systems use titanium oxide as a core material tuned to collect and transmit the electrons generated by the photo-excitation of dye molecules. However, most of the solutions demonstrated so far require a thermal treatment of the TiO2 photoelectrodes at temperatures that preclude using any flexible organic substrate. This treatment prevents development of any roll-to-roll manufacturing process, which would be the only way to achieve cost effective large scale production. In order to overcome this major drawback, a novel synthesis of TiO2 at room temperature is described in the present document. This synthesis leads to 4-6 nm nanocrystalline anatase, the desired phase of titanium oxide for photoactive applications. An intensive study was carried out to explore the properties of these nanoparticles, via a mixture design study designed to analyze the influence of the starting composition on the final TiO2 structure. The influence of a post-synthesis thermal treatment was also explored. This 4 nm nanocrystalline TiO2 exhibits a high specific surface area and a good porosity that fulfills the requirements for an efficient photoanode; a high surface area allows high dye loading, and, hence, increases photocurrent and photo-conversion efficiency. Another important result of this study is the band gap, as it confirmed that nanocrystalline anatase has an indirect band gap and a quantum confinement for a crystal size of less than 10 nm. This result, well-known for bulk materials, had been discussed in some previous publications that claimed the effectiveness of a direct band gap. Following this synthesis and the structural and spectroscopic analyzes carried out in parallel, photocatalytic study was an important tool to further explore the semiconducting properties of this material. Additionally, our material gave very promising results in photocatalytic dye degradation, compared to the commercial products, even if it was not initially synthesized for this application. We assign these performances to the improved crystallinity resulting from thermal activation, without changing the crystal size, and to the ability to optimize the surface. This photocatalytic study gave us insights into the methods that optimize the electronic structure of the titanium oxide. Hence, we decided to thermally activate the nanoparticles before the preparation of films to be inserted into DSSCs. At this stage, as the thermal activation applies to the powder, the resulting material can still be used with flexible substrates. We have successfully integrated these nanoparticles in dye sensitized solar cells. Various organic additives were added to the TiO2 paste used to prepare photoelectrode films, to increase the porosity of the film and have a crack–free film with good attachment to the substrate. We demonstrated that the dye was chemically attached to the TiO2 surface, which led to better electron transport. Different treatment methods (UV and thermal) were applied to the film to cure it from organic additives and improve the electronic connectivity between the particles. When the UV treatment was applied as a single method, i.e. without thermal treatment, the cell performance was lower, but a combination of thermal treatment and UV enhanced this performance. We compared our nanoparticles to the reference material used in most of the studies on DSSC, that is, TiO2 Degussa, with cells prepared the same way. Our nanoparticles revealed higher overall conversion efficiency. As the dye attachment to the TiO2 surface is an important parameter that enhances the cell efficiency, so we checked via ATR-FTIR how the dye attached to the TiO2 surface. In addition, FTIR, UV-Vis, and IV measurements revealed that the amount of dye adsorbed was increased through HCl treatment of the photoelectrode. We also checked the internal resistance of the cell using impedance spectroscopy, and the analysis proved a successful integration of the nanoparticles in dye–sensitized solar cells as there was an increase in both the electron life time and the recombination resistance, and a decrease in the charge transfer resistance compared to the commercial powder.