On the Efficiency and Security of Cryptographic Pairings 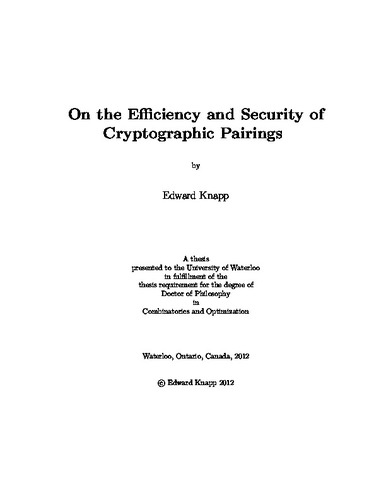 Pairing-based cryptography has been employed to obtain several advantageous cryptographic protocols. In particular, there exist several identity-based variants of common cryptographic schemes. The computation of a single pairing is a comparatively expensive operation, since it often requires many operations in the underlying elliptic curve. In this thesis, we explore the efficient computation of pairings. Computation of the Tate pairing is done in two steps. First, a Miller function is computed, followed by the final exponentiation. We discuss the state-of-the-art optimizations for Miller function computation under various conditions. We are able to shave off a fixed number of operations in the final exponentiation. We consider methods to effectively parallelize the computation of pairings in a multi-core setting and discover that the Weil pairing may provide some advantage under certain conditions. This work is extended to the 192-bit security level and some unlikely candidate curves for such a setting are discovered. Electronic Toll Pricing (ETP) aims to improve road tolling by collecting toll fares electronically and without the need to slow down vehicles. In most ETP schemes, drivers are charged periodically based on the locations, times, distances or durations travelled. Many ETP schemes are currently deployed and although these systems are efficient, they require a great deal of knowledge regarding driving habits in order to operate correctly. We present an ETP scheme where pairing-based BLS signatures play an important role. Finally, we discuss the security of pairings in the presence of an efficient algorithm to invert the pairing. We generalize previous results to the setting of asymmetric pairings as well as give a simplified proof in the symmetric setting.